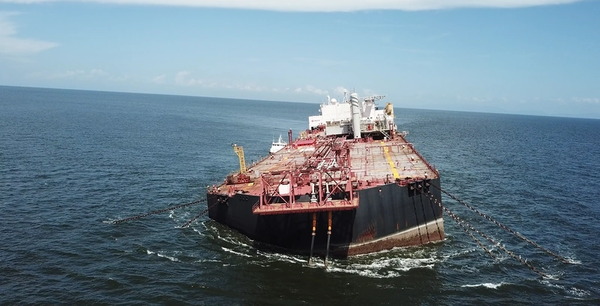 The United States has assured Italian oil company Eni SpA that efforts to prevent a spill at a floating crude facility in Venezuela would not run afoul of sanctions, the company, and the U.S. State Department said on Monday.

Images in recent months showing the Nabarima floating storage and offloading facility (FSO), part of the Petrosucre joint venture between Eni and Venezuela’s state oil company Petroleos de Venezuela, tilting to its side have raised concerns of a potential environmental catastrophe.

The Nabarima has been idle for nearly two years after Washington sanctioned PDVSA as part of its push to oust Venezuelan President Nicolas Maduro. It holds some 1.3 million barrels of Corocoro crude.

“Eni’s plan to safely offload the Nabarima FSO received on Thursday, Oct. 29, a green light from the U.S. authorities, confirming that the current sanctions policy does not prevent the company from offloading the cargo and repairing the vessel, Eni, which owns 26% of Petrosucre, said in a statement.

Eni added that it would proceed with its plan upon approval from PDVSA.

PDVSA, which owns the remaining 74% of Petrosucre, did not immediately respond to a request for comment. PDVSA has been preparing its own plan to offload some crude aboard the Nabarima to its Icaro tanker.

It is not clear if Eni will draft a new offloading plan, or if the companies will move ahead to transfer crude to a PDVSA-operated vessel. Experts have recommended Petrosucre transfer the crude to a dynamic positioning vessel to minimize risks.

A spokesperson for the State Department’s Bureau of Western Hemisphere Affairs said the department “conveyed our support for emergency repairs” to Eni, but did not specify a stance on offloading the crude.

“Eni is under no sanctions risk to begin immediate emergency repairs,” the spokesperson said in a statement.