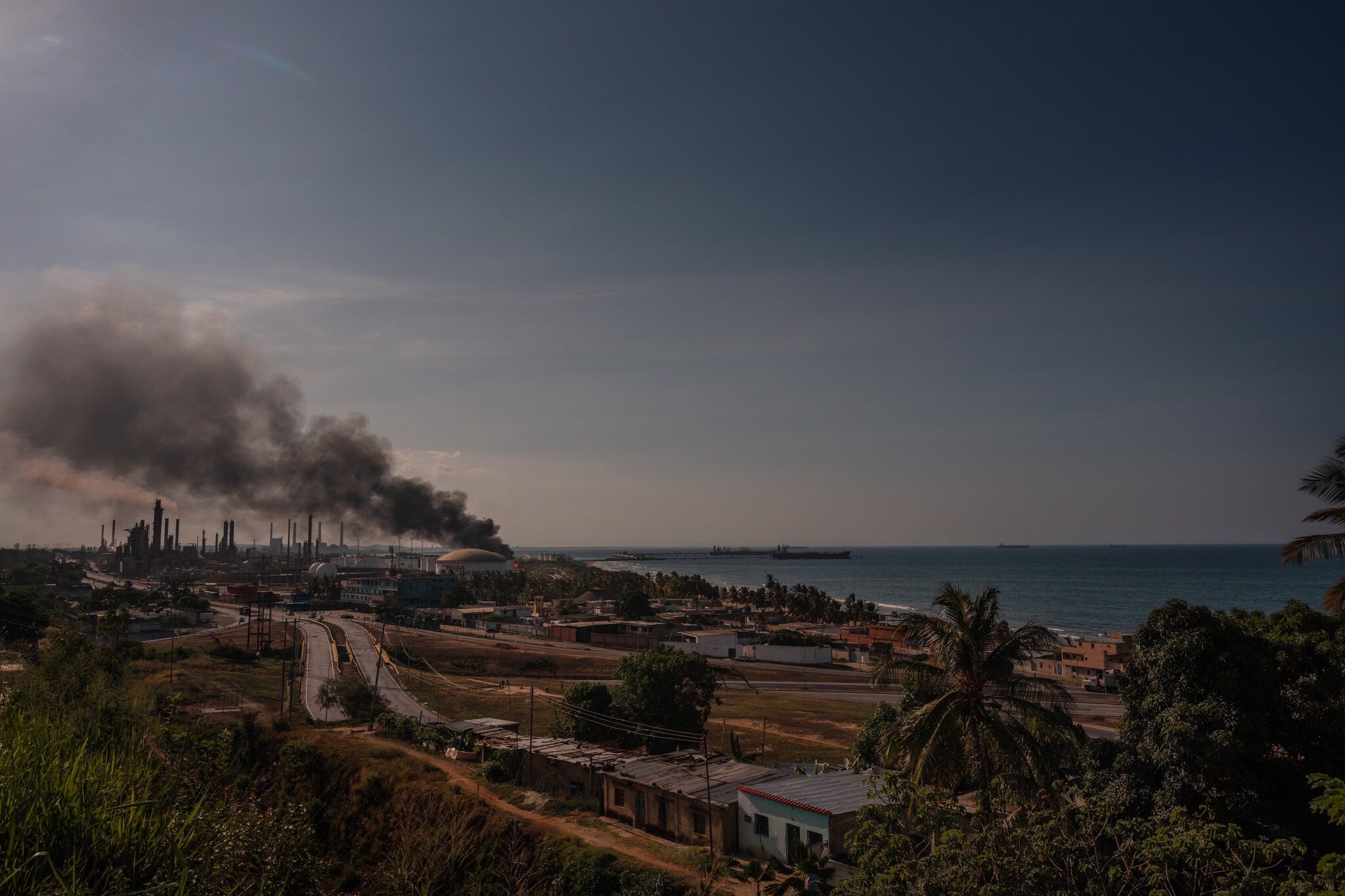 CABIMAS, Venezuela — For the first time in a century, there are no rigs searching for oil in Venezuela.

Wells that once tapped the world’s largest crude reserves are abandoned or left to flare toxic gases that cast an orange glow over depressed oil towns.

Refineries that once processed oil for export are rusting hulks, leaking crude that blackens shorelines and coats the water in an oily sheen.

Fuel shortages have brought the country to a standstill. At gas stations, lines go on for miles.

Venezuela’s colossal oil sector, which shaped the country and the international energy market for a century, has come to a near halt, with production reduced to a trickle by years of gross mismanagement and American sanctions. The collapse is leaving behind a destroyed economy and a devastated environment, and, many analysts say, bringing to an end the era of Venezuela as an energy powerhouse.

“Venezuela’s days as a petrostate are gone,” said Risa Grais-Targow, an analyst at Eurasia Group, a political risk consultancy.

The country that a decade ago was the largest producer in Latin America, earning about $90 billion a year from oil exports, is expected to net about $2.3 billion by this year’s end — less than the aggregate amount that Venezuelan migrants who fled the country’s economic devastation will send back home to support their families, according to Pilar Navarro, a Caracas-based economist.

Production is the lowest in nearly a century after sanctions forced most oil companies to stop drilling for or buying Venezuelan oil — and even that trickle could dry up soon, analysts warn.

“Without drilling, without services companies and without money, it’s very difficult to maintain even the current levels of production,” said David Voght, head of IPD Latin America, an oil consulting firm. “If the political situation in the country doesn’t change, you could go to zero.”

The decline has diminished beyond recognition a country that just a decade ago rivaled the United States for regional influence. It is also unraveling a national culture defined by oil, a source of cash that once seemed endless; it financed monumental public works and pervasive graft, generous scholarships and flashy shopping trips to Miami.

Crippling gasoline shortages have led to an outbreak of dozens of daily protests across most Venezuelan states in recent weeks.

In the capital, Caracas, periodic fuel shipments from Iran, paid for with the country’s remaining gold reserves, provide a semblance of normality for a few weeks at a time. But in the countryside, residents have defied the pandemic lockdown to block roads and clash with police amid their desperate demands for the modicum of fuel they need to survive.

Across Venezuela’s oil towns, the sticky black crude that once provided jobs and social mobility is poisoning residents’ livelihoods.

In Cabimas, a town on the shores of Lake Maracaibo that was once a center of production for the region’s prolific oil fields, crude seeping from abandoned underwater wells and pipelines coats the crabs that former oil workers haul from the lake with blackened hands.

When it rains, oil that has oozed into the sewage system comes up through manholes and drains, coursing with rainwater through the streets, smearing houses and filling the town with its gaseous stench.

Cabimas’s desolation marks a swift downfall for a town that just a decade ago was one of the richest in Venezuela.

During the boom years, PDVSA, the state-owned oil company, showered the residents of oil towns such as Cabimas with benefits including free food, summer camps and Christmas toys. It built hospitals and schools.

Now, the bankrupt company’s tens of thousands of workers have been reduced to dismantling oil facilities for scrap metal and selling their distinctive coveralls, emblazoned with the company logo, to make ends meet.

“We used to be kings because we lived on the shores of PDVSA,” said Alexander Rodríguez, a Cabimas fisherman, whose two boat motors have been spiked by an oil spill. “Now we’re cursed.”

PDVSA’s social club, where locals used to gather to drink whiskey, play tennis and watch movies, is in ruins, and, like so much in town, smeared in oily, black residue.

“There are no jobs, no gasoline, but the oil is spilling everywhere,” said Francisco Barrios, a baker.

The end of oil’s central role in Venezuela’s economy is a traumatic reversal for a nation that in many ways defined a petrostate.

After major reserves were tapped near Lake Maracaibo in 1914, oil workers from the United States poured into the country. They helped build many Venezuelan cities, and instilled in the country a love of baseball, whiskey and big gas-guzzling cars, differentiating it forever from its South American neighbors.

As a driving force in the founding of the Organization of the Petroleum Exporting Countries in 1960, Venezuela helped Arab nations take control of their oil wealth, shaping the global energy market and the geopolitical order for decades to come.

Even in those heady days, Venezuela’s prominent oil minister, Juan Pablo Pérez Alfonzo, warned there were pitfalls to sudden oil wealth: It could lead to excessive debt and the destruction of traditional industries.

In the years that followed, despite abundant oil revenues, Venezuela faced a roller coaster of recurring debt and financial crises. The wealth also did nothing to diminish corruption or inequality, and when a former paratrooper, Hugo Chávez, appeared on the national stage in the 1990s promising a revolution that would put Venezuela’s oil to work for its poor majority, he captivated the nation.

The troubled industry went into a free fall last year, when the United States accused Mr. Chavez’s successor and protégé, President Nicolás Maduro, of election fraud and enacted severe economic sanctions to force him from power.

Soon, Venezuela’s oil partners, bankers and customers broke ties, and output plunged at a pace that has outstripped Iraq’s downturn during both Gulf Wars and Iran’s after its Islamic Revolution.

The sanctions forced the last American oil companies in the country to stop drilling. They may leave the country entirely in December, if the Trump administration ends their exemptions from sanctions.

Mr. Maduro’s Russian and Chinese partners have not filled the breach, downsizing production and cutting the oil trade, according to workers at the ventures.

Venezuela’s opposition, which last year with Western backing challenged Mr. Maduro for the country’s leadership, claims it can rebuild the oil industry once in power by ending American sanctions and offering investors attractive terms.

But analysts say Venezuelan oil industry is unlikely to attract the level of investment needed for a full recovery. In an era of stagnating global demand, weak prices and growing environmental concerns, the country’s extra heavy oil is particularly polluting and expensive to process.

To compensate for the loss of revenue, Mr. Maduro has turned to illicit gold mining and drug trade to stay in power, according to the United States government.

Mr. Maduro’s retreat from oil has left the shrinking Venezuelan economy comparable to that of the Democratic Republic of Congo, a country that has been plagued by civil strife since independence. But the transition has allowed Mr. Maduro to keep the loyalty of the military and weather the punishing American sanctions, said Ms. Grais-Targow, the analyst.

The costs of this economic contraction have been borne by the Venezuelan people, she said.

More than five million Venezuelans, or one in six residents, have fled the country since 2015, creating one of the world’s greatest refugee crises, according to the United Nations. The country now has the highest poverty rate in Latin America, overtaking Haiti this year, according to a recent study by Venezuela’s three leading universities.

Near Venezuela’s massive coastal refineries, residents forage for firewood and trawl their fishing nets on foot to find food. Their fishing boats are beached without gasoline, and their kitchens have long run out of cooking gas.

“If we haven’t reached the rock bottom yet, we’re centimeters from it,” said José Giron, who used to ferry tourists in the beach town of Tucacas, near Venezuela’s three largest refineries.

PDVSA has kept minimal production going by sacrificing basic maintenance of equipment, at a growing environmental cost. The country’s Caribbean coast, a great source of national pride with its turquoise water and white-sand beaches, has been damaged by at least four large oil spills this year — an unprecedented number, according to Venezuelan biologists.

Gasoline shortages and the pandemic have already emptied Tucacas’s beaches of tourists. Now, the fish that many here rely on for survival are being decimated by the oil.

“These spills are the ultimate affront to the people,” said Luis Vargas, who used to sell seafood cocktails to tourists.

The great, creeping oil stains are also ravaging Cabimas, in the country’s west, where residents fish the polluted lake on inflated inner tubes and scour decaying oil facilities for a little gasoline. Three people died last month when a scuffle over a leaking gasoline pipeline led to an explosion.

For generations, Cabimas residents said they were the proud champions of Venezuela’s oil. They now, too, call it “the devil’s excrement.”