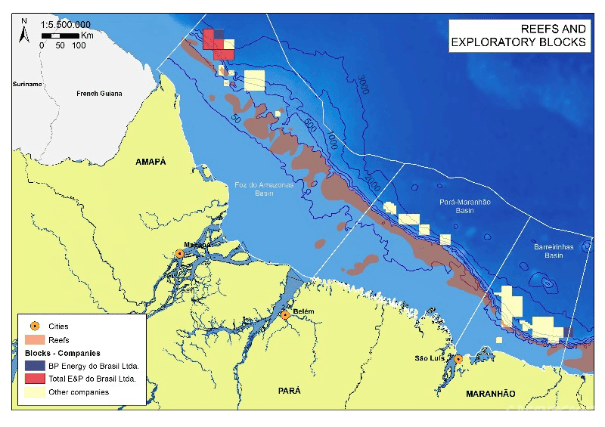 Ibama rejected Total’s request for reconsideration to unseal the licensing process for exploratory drilling in the area of ​​blocks FZA-M-57, 86, 88, 125 and 127, in Foz do Amazonas, won in the 11th round of the ANP. Now, according to information confirmed by the Ministry of the Environment, the company must restart the licensing with opening of new process to maintain the project.

– Total’s president, Philippe Blanchard, was at Ibama, where he met with the president of the environmental body. Total started licensing the project in May 2014.

– In December last year, Ibama rejected an appeal filed by Total against a decision rejecting the license for drilling. The technical opinion on Total Oil’s license application states that there are “profound uncertainties related to the enterprise’s Individual Emergency Plan (PEI).

– A few days after Ibama’s refusal to license blocks in Foz do Amazonas, Total began a campaign to improve the image of the company’s exploration projects in the region. Total was authorized on 22 October by the French government to carry out a drilling campaign in French Guiana. In a press release the company sought to reinforce its commitment to operate transparently and invited NGOs to visit the site.

The Licensing became a case of Justice and the Federal Public Prosecutor ‘s Office (MPF) of Amapá issued a recommendation for Ibama to withdraw license for drilling of oil wells in the Foz Basin of the Amazon River, requested by Total, for considering the Study Environmental Impact Assessment (EIA) in the region incomplete.

– A month earlier, Ibama once again asked BP to supplement information on its impact study of offshore drilling activity on Block FZA-M-59, in the Foz do Amazonas Basin. In a technical opinion on the study presented by the company, the environmental agency concluded that “additional information and clarification is still necessary to subsidize the licensing process of the activity.”

– Yesterday, ANP’s board denied a request from PetroRio-controlled oil company Brasoil to suspend the FZA-M-254 and FZA-M-539 exploration blocks concession contract in the Foz do Amazonas Basin. The oil company claimed delay in the licensing and requested the suspension of the contracts until the manifestation of IBAMA by the deferral of the licenses for drilling.