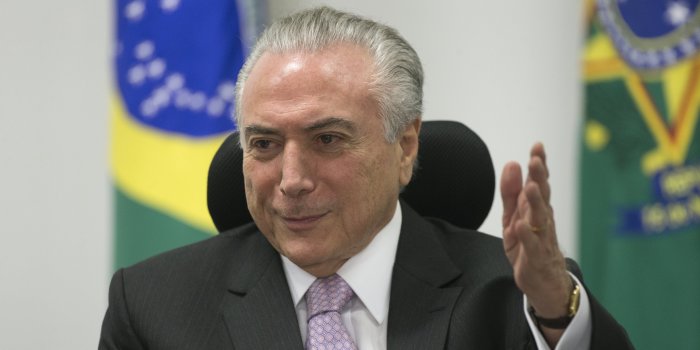 SÃO PAULO—Brazilian President Michel Temer is banking on the country’s tepid economic recovery to help him survive a deep political crisis that has engulfed his government since he was accused of accepting bribes in the nation’s vast corruption scandal.

Speaking to a small group of foreign reporters late Monday, the unpopular leader said he expected data this week to show Brazil is finally emerging from a deep recession and vowed to push ahead with pension and labor overhauls to guarantee future growth.

“I am fully able to continue promoting the reforms, which means I have the ability to govern,” Mr. Temer told reporters at the government-organized briefing. “Brazil will not stop.”

“It’s natural that looking at the news over recent days, investors look at Brazil and wonder what will happen next,” said Mr. Temer. “But now we are coming out of the recession.”

Earlier Monday, Finance Minister Henrique Meirelles said data this week will likely show Brazil grew by 0.7%-0.8% in the first quarter, compared with the previous three months. The figures would signal the end of what has been Brazil’s deepest and longest recession on record.

“His strategy is to survive one day at a time,” said Christopher Garman at political risk consultancy Eurasia Group. “He will try to win small battles in Congress to create an air of governability.”

Eurasia puts the odds of Mr. Temer being ousted at 70%. However, Mr. Temer, in his comments to reporters Monday, remained defiant about his ability to serve out the rest of his term until presidential elections in 2018.

He called on Brazil’s top electoral court, the TSE, for a “quick solution” in its long-running case over whether the 2014 campaign that put him and Ms. Rousseff in power was funded illegally. While the case was opened before the recent corruption allegations against Mr. Temer, analysts believe that the TSE may now move quickly to unseat the president in light of growing calls for him to resign. Mr. Temer declined to comment on whether he would appeal any unfavorable decision by the court.

Instead, Mr. Temer highlighted his government’s ability to push economic change through Congress, adding that the Senate would likely soon approve labor overhauls.

Analysts say that if the government manages to push fiscal reforms through Congress they will likely be watered down in the process, particularly one involving unpopular changes to Brazil’s generous pension system.

Write to Samantha Pearson at samantha.pearson@wsj.com and Paulo Trevisani at paulo.trevisani@wsj.com

Appeared in the May 30, 2017, print edition as ‘Brazil President Links His Fate to Economy.’