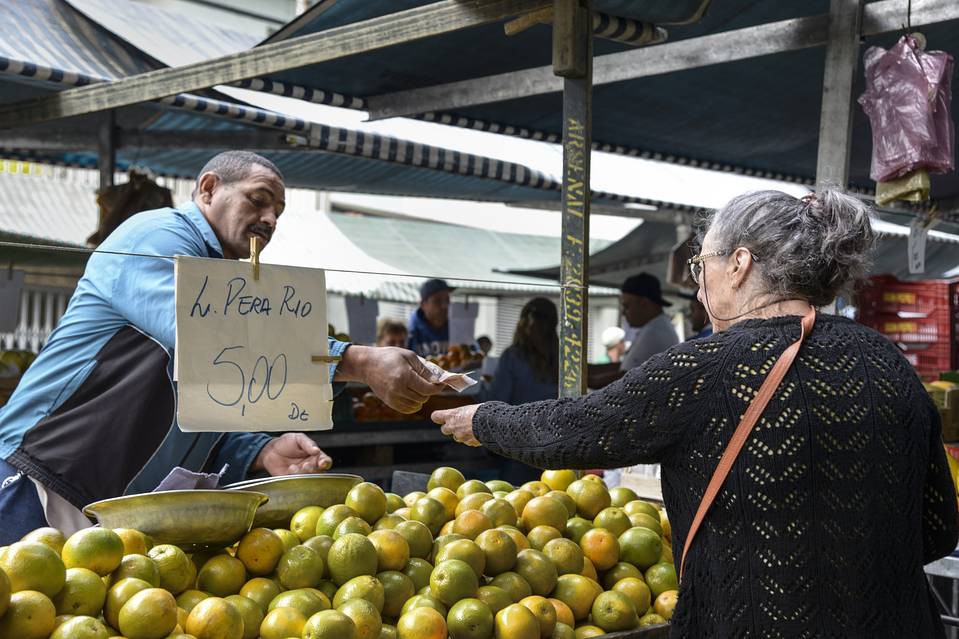 A vendor, left, handed a shopper change at a street market in São Paulo in July. Brazil’s expansion could surprise on the positive side in 2017, a Moody’s analyst said Tuesday. PHOTO: BLOOMBERG NEWS
By
LUCIANA MAGALHAES

SÃO PAULO—Brazil’s economy has probably started to rebound from the worst recession since at least the 1930s and growth could surprise on the positive side next year, Moody’s Investors Service analyst Samar Maziad said Tuesday.

The now-completed impeachment process against former President Dilma Rousseff, who was removed from office in August, has cleared up some of the uncertainty that was weighing on the economy, Ms. Maziad said at a Moody’s conference in São Paulo.

The anticorruption investigation known as Operation Car Wash has also hit growth, but there has been a change in investor sentiment recently and confidence is slowly returning, she said.

“The key is that on the growth front, the worst is probably behind us,” Ms. Maziad said.

Moody’s forecasts Brazil’s economy will grow 0.5% next year, after contracting 3.5% in 2016. But the expansion in 2017 could surprise on the positive side, reaching up to 1%, Ms. Maziad said. The ratings firm expects the recovery to be led by business investment on the back of rising confidence.

The South American country’s gross domestic product shrank 3.8% last year, and Brazil’s central bank on Tuesday forecast a contraction of 3.3% this year. Brazil’s GDP would expand 1.3% in 2017, according to the bank.

As economic conditions improve, there is less risk that government would need to financially help some state-owned companies, such as oil company Petróleo BrasileiroSA, or Petrobras, that has been the target of Brazil’s largest corruption investigation, Mr. Maziad said.

“Petrobras’s liquidity profile has improved” for this year and 2017, the analyst said.

The new government of President Michel Temer now has to focus on getting much-needed economic measures passed through Congress, according to the Moody’s analyst.

Mr. Temer has proposed a spending cap that would limit increases in the budget to the previous year’s inflation rate. The Temer administration is also preparing changes to the country’s pension system, with the goal of shrinking its chronic funding gap.

The president’s challenge would be pushing the measures through Brazil’s balky Congress, Ms. Maziad said. The changes “aren’t easy,” she said. “We have to see how far the cooperation (with Congress) will go.”

Moody’s in February cut Brazil’s credit rating to junk status, citing the effects of the impeachment process and the corruption investigation on the economy. The country needs to implement measures to cut debt and spur economic growth to earn a higher rating, according to Ms. Maziad.

Even though Moody’s sees some growth improvement in Latin America, sovereign ratings for countries in the region are likely to continue to be under pressure for a while, said Mauro Leos, vice president and senior credit officer at Moody’s.

Write to Luciana Magalhaes at Luciana.Magalhaes@wsj.com