Amid a litany of other challenges, some indicators suggest prospect of a recovery, however plodding

SÃO PAULO—As the world starts to focus on the Olympic Games in Rio de Janeiro, economists here say they see signs another megaevent is approaching: an end to Brazil’s worst downturn since the Great Depression.

Latin America’s largest country remains mired in a brutal recession, but some leading economic indicators have ticked up slightly in recent weeks, or at least stopped deteriorating, raising prospects for a return to growth.

A welter of other challenges looms as Brazil comes under the Olympic spotlight. Suspended President Dilma Rousseff’s impeachment trial is under way in the Senate, and police on Sunday were hunting for a 12th suspect after arresting 11 men last week they say was part of a group for allegedly plotting to conduct terrorist attacks during the Games. The Zika virus is triggering health concerns among some athletes and other visitors. And a continuing corruption probe is implicating a growing circle of business and political leaders. 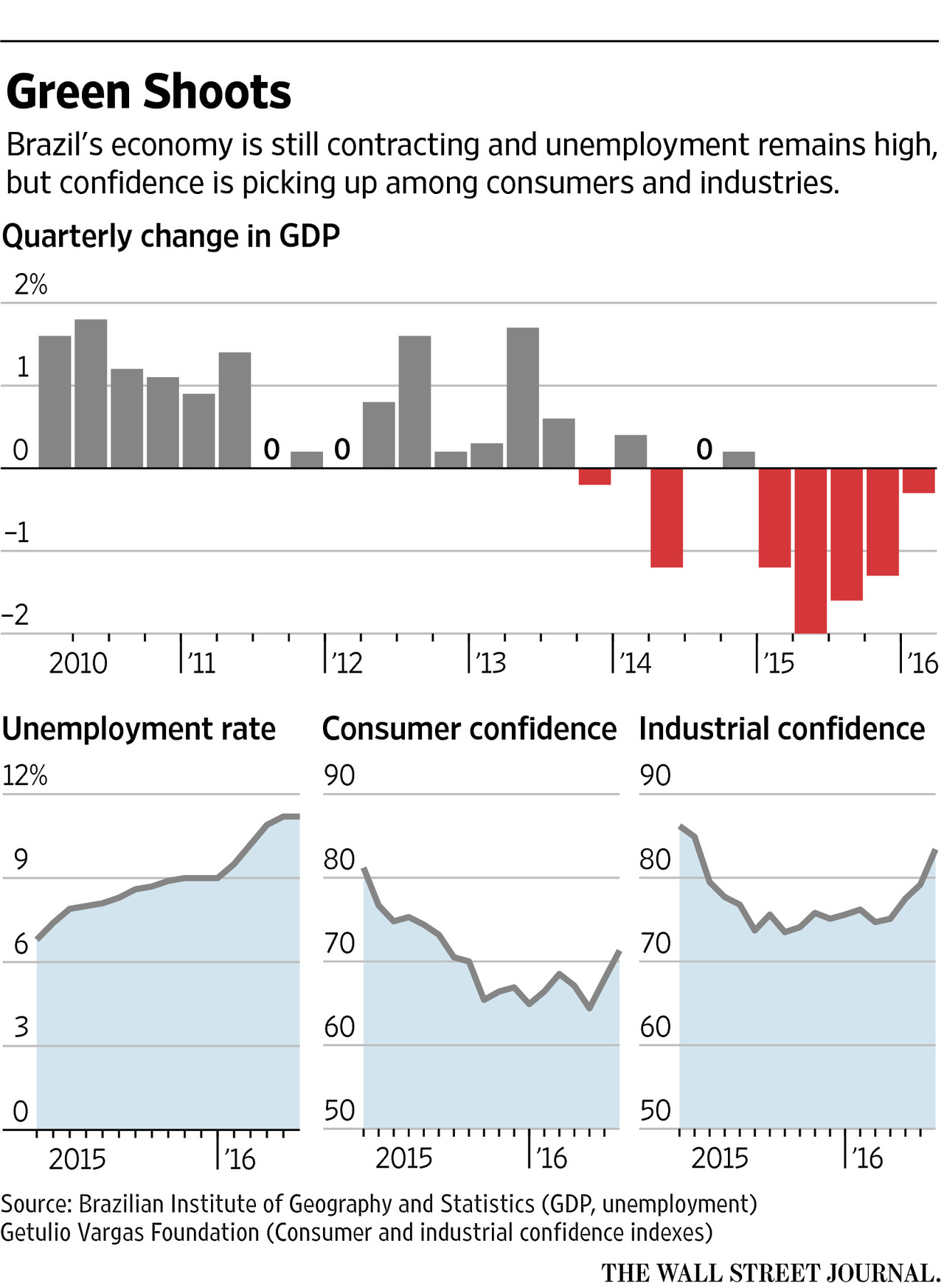 In that context, the recovery, which could come as soon as the fourth quarter, will likely be plodding. Brazil’s gross domestic product is projected to expand by about 1% next year, following deep back-to-back contractions of 3.8% in 2015 and an estimated 3.3% this year, according to a recent survey of 100 economists by the nation’s central bank.

“We’re near a turning point,” said Newton Rosa, chief economist at São Paulo-based asset-management firm Sulamerica Investimentos. “While we are hitting the bottom, it will not be a V-shaped recovery.”

Among the encouraging signs is confidence among consumers and businesses, which has risen since the leftist Ms. Rousseff was suspended in mid-May over allegations, which she denies, of illegally masking a growing government deficit.

Policies aimed at correcting course were stymied by political gridlock linked to the massive corruption scandal centered on the state oil company, and by the move to impeach Ms. Rousseff.

Unemployment now tops 11%. Inflation reached a 12-year high of 10.7% in January, despite the central bank’s efforts to rein in prices by lifting the benchmark Selic to 14.25%, one of the highest rates in the world.

Since January, though, price rises have started to ease, and the Selic is forecast to drop to 13.25% by year-end and finish 2017 at 11%, according to the central bank survey.

Other indicators offer hope, too. Industrial production has either risen or been unchanged from the previous month since March, according to Brazil’s statistics agency. Vehicle sales and production increased in June from May, the third consecutive month-on-month increase for both, according to Brazilian car makers association Anfavea.

“The market seems to have found its floor,” Anfavea President Antonio Megale said recently. “Normally, after the numbers have stabilized, you start to get growth.”

Financial markets have rallied on hopes of Ms. Rousseff’s ouster and signs of green shoots in the economy. The country’s benchmark stocks index, the Ibovespa, has risen about 31% so far this year, after dropping 13% in 2015, while Brazil’s currency, the real, has strengthened about 22% against the dollar so far this year.

Still, Brazil’s recovery is fragile and its public accounts are precarious. While Mr. Temer’s administration has promised austerity, public debt is forecast to hit 76.6% of GDP by the end of 2017, up from around 69% currently. Since September, all three major credit ratings firms have downgraded Brazil’s sovereign debt to junk.

Another concern is Operation Car Wash. Brazil’s largest-ever corruption probe has ensnared dozens of politicians from all major parties. Three members of Mr. Temer’s new cabinet were forced had to resign within a month of taking office after being named by informants.

Mr. Temer hasn’t been implicated by authorities and has denied wrongdoing. But more political fallout could weaken his ruling coalition and curb his ability to pass badly needed overhauls.

“If that happens, we could sit at the bottom of the well for even longer,” said Mr. Rosa of Sulamerica Investimentos.

Unemployment will continue to be a drag on the economy, having risen to 11.2% in the three months ended in May. That is weighing on retail sales, which as of May had declined 14 of the previous 18 months and are 20% below the August 2012 peak, according toAlberto Ramos, head of Latin America research for Goldman Sachs.

Laurence Gomes, chief financial officer of clothing chain Lojas Renner, said his firm has felt the pain. But his company’s battered stock is up more than 50% this year on expectations of better times ahead.

“Employment is the last indicator that starts to improve,” Mr. Gomes said.