This would be fatal for Brazil’s  economic revival…. 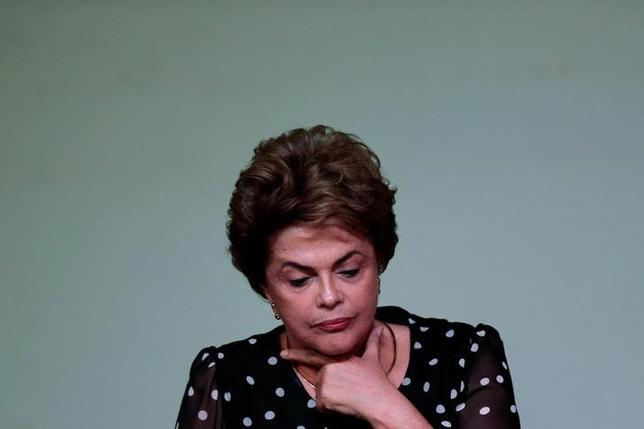 Suspended Brazilian President Dilma Rousseff gestures during the launching ceremony of the book ”Resistance to the 2016 Coup,” written by professors from the University of Brasilia, in Brasilia, Brazil, May 30, 2016.
REUTERS/UESLEI MARCELINO

A wave of scandals buffeting Brazil’s interim government is weakening the resolve of some senators to oust suspended President Dilma Rousseff, offering the leftist leader hope of surviving an impeachment trial in the upper house.

Soccer-star-turned-Senator Romario shocked the government last week when he announced he was no longer certain to vote in favor of removing Rousseff. Brazil’s first female leader was placed on trial by the Senate last month on charges of breaking budget rules.

His announcement followed a flurry of gaffes, policy missteps and scandals that have rocked the three-week-old administration, including the resignation of two ministers after leaked recordings suggested they tried to block a massive anti-graft investigation at state oil company Petrobras before taking office.

The recordings, taped secretly by a defendant in the Petrobras probe who made a plea bargain deal with prosecutors, appeared to support Rousseff’s claim that her impeachment was an opposition conspiracy to seize power and avoid prosecution.