Glimmers of economic hope may come too late for Dilma Rousseff

by: Joe Leahy in São Paulo

Most analysts however believe that her real crime, in the eyes of markets, industry and voters, was the murder of one of the world’s most promising economic growth stories.

The irony then is that, even as the senate prepares for a vote on May 11 that is expected to open formally the impeachment trial and trigger her suspension as president, a faint pulse can be detected in her supposed victim: Brazil’s economy.

Under Ms Rousseff’s watch, gross domestic product in Brazil sank from growth of 7.5 per cent in 2010, the year before she took office, to a contraction of 3.8 per cent last year — a total downward swing of more than 11 percentage points.

The crash was wrought by the end of the commodities supercycle combined with policy errors, say analysts. These included trying to control prices and interest rates and attempting to stimulate the economy through ad hoc tax breaks and pumping up state bank credit.

Mr Temer will inherit an economy in its worst recession in more than a century, with growth expected to be negative 3.8 per cent again this year, according to the International Monetary Fund. But some indicators, such as inflation expectations, are beginning to flash green again.

Ms Rousseff last year appointed a hawkish finance minister, Joaquim Levy, to try to undo some of her errors. He removed price controls, leading to a one-off rise in inflation. The central bank countered by maintaining the benchmark Selic interest rate at a high of 14.25 per cent.

While prices remain high, inflation expectations in a weekly survey of economists conducted by the central bank for the coming 12 months at 6.2 per cent have begun to fall back within the official target range of 4.5 per cent plus or minus 2 percentage points.

Other key adjustments in the economy include a fall in the cost of labour.

The real, meanwhile, has depreciated from its highs of about R$1.60 to the dollar during the boom years of 2010-11 to more than R$4 at the height of the political crisis. While the currency has since strengthened slightly, the depreciation is helping to lower Brazil’s current account deficit and lift confidence in the country’s battered export sector.

This and Brazil’s still strong foreign exchange reserves have helped maintainforeign direct investor interest, with external fund inflows in the first quarter of this year rising to $16.9bn, from $13.1bn a year earlier. Much of this interest is from multinationals and private equity either looking to increase market share or scouting for bargains, say analysts.

“The worst of the crisis has already passed,” says Marcelo Costa, chief executive of Engebanc, a real estate consultancy. He says prices in the office market had fallen up to 60 per cent but did not expect the same bargains to be available in six months to a year.

“We are seeing with the end of the political crisis that the economy will begin to grow again,” he says. 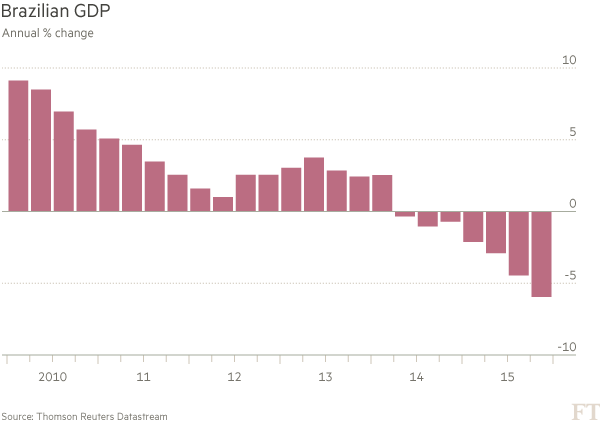 Some economists say that if Mr Temer comes into office and is able to assemble a credible economic team, the virtuous circle could continue. Interest rates could begin to fall this year, investment pick up and public finances stabilise.

But growth could remain elusive given the weakness of the economy and the strong budgetary tightening required, said Marcos Casarin of Oxford Economics.

“A Temer-led government would be unlikely to deliver decent growth before the next presidential elections, currently scheduled for 2018,” he said in a report. 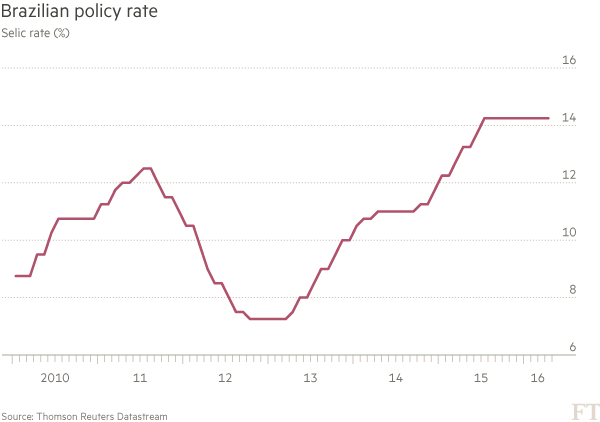 With the long-term political stability of a Temer government also uncertain — he and other important members of his PMDB party have been linked to a sweeping corruption scandal at state-owned oil company Petrobras — investors will remain cautious about Brazil.

“It’s going to take some time for Brazil to get through its issues,” Indra Nooyi, chairman and chief executive officer of PepsiCo, said in an analyst call this month. “Globally Brazil is one of the toughest economic situations today.”

With additional reporting by Lindsay Whipp in Chicago