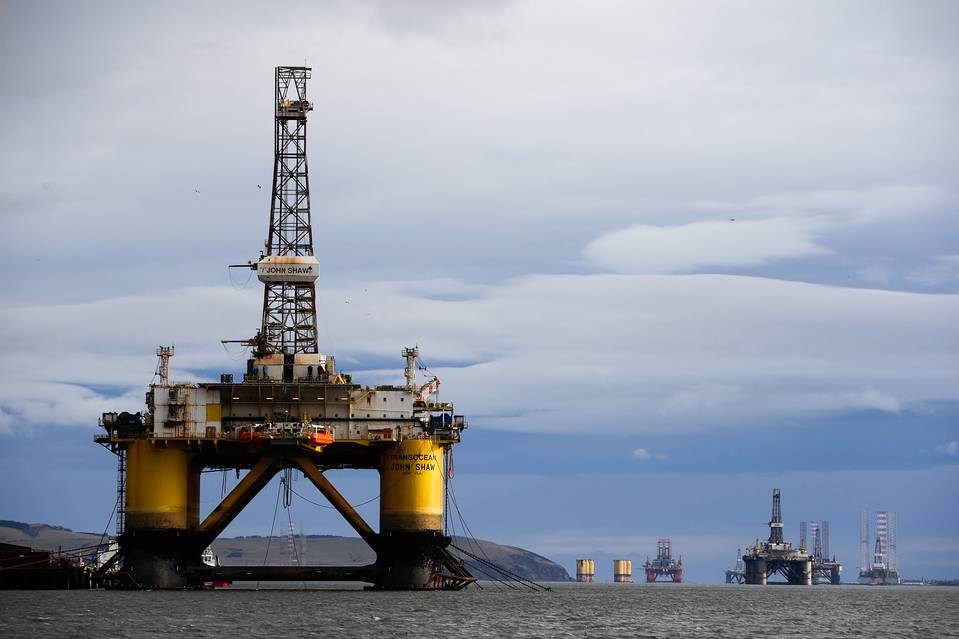 ENLARGE
There are some signs that the influence of oil on other assets may be fading. Above, the Transocean John Shaw oil platform in Cromarty, U.K. PHOTO: BLOOMBERG NEWS

Here’s a number to focus on: $50. That’s per barrel, the price of Brent crude oil at which falling prices started to hurt rather than help shares and other risky assets.

Monday’s 6% fall and rebound in oil pushed equities down and back up, once again demonstrating its importance. Brent prices rose 2.6% to $44.03 Tuesday, well within sight of $50.

Despite the obvious impact on Monday, there are some signs that the influence of oil on other assets may be fading. If the price keeps going up, the question is not only whether it will carry on, but whether more expensive oil will continue to be good news for shares.

The answer depends to a large extent on the explanation for why the link was so tight to begin with. Wind back to last summer, when Brent tumbled below $50 and stayed down at levels not reached since the depths of the financial crisis. As it fell toward $50, it became more important to shares—and not only to shares in oil companies and airlines, which normally suffer and benefit most respectively from cheap oil.

The main reason: spillover effects from spending cuts and defaults at energy companies. The speed of the oil decline led to rapid retrenchment in capital spending and widespread job cuts, both with knock-on effects on the real economy. At the same time a sharp rise in defaults created fear of financial contagion from shale drillers which had financed their operations with a flood of junk bonds and from commodity-dependent emerging-market companies with excessive debt.

As oil has risen again, those fears have receded. There is still little sign that Americans are spending more of the money they save from cheaper fuel, something economists had assumed would boost growth. But the pressure for even deeper cuts by oil companies has reduced.

“If oil stays around $40, the correlations will continue to break down,” says Andrew Milligan, head of global strategy at insurance group Standard Life.

This is not merely about the importance of Big Oil to major indexes. Even stripping out energy stocks, the tendency of the S&P 500 to move together with oil increased sharply as the crude price dropped, as the International Monetary Fund showed last week. 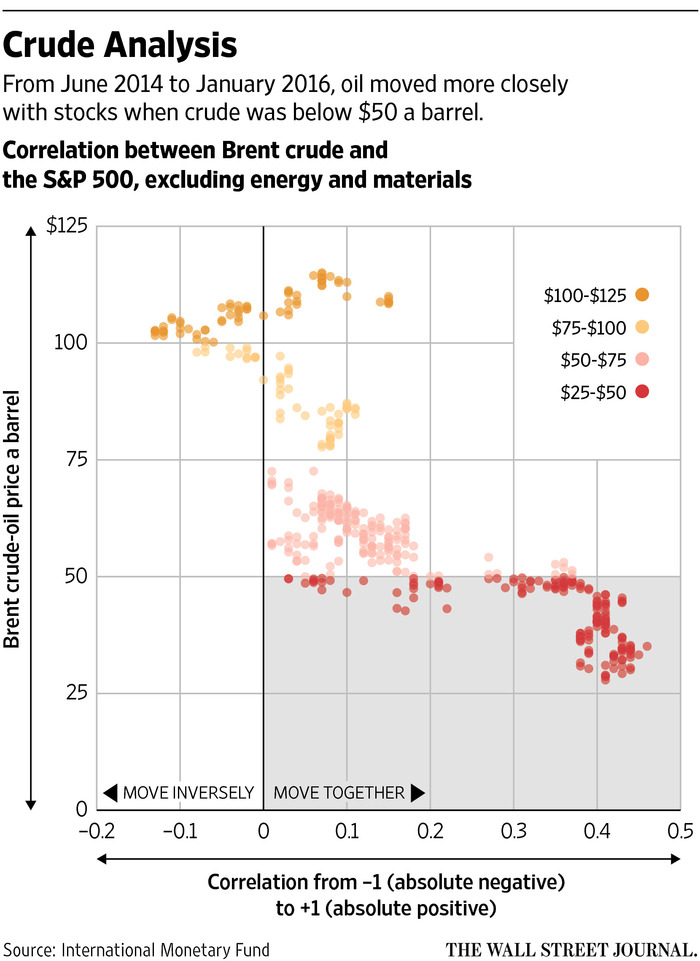 The correlation between Brent, the global oil benchmark, and the S&P 500 is still exceptionally high on multi-month measures. But earlier this month the 10-day correlation reached its lowest since last July, when Brent stood at $56 a barrel.

The effects of the oil price are tricky to analyze because so much depends on the cause. Oil is driven both by supply issues—such as the weekend meeting of members of the Organization of the Petroleum Exporting Countries and Russia in Qatar, where ministers failed to negotiate a production freeze—and by global demand.

If demand rises, a higher price might be good news for risky assets as it reflects strength in the global economy. In 2009, in the aftermath of the financial crisis, shares and oil soared together and the correlation between the two was close to perfect.

On the other hand, if the oil price rises because of a supply shock, it can hammer risky assets. In 1990, the first Gulf War tripled the price of oil, and shares suffered badly, with correlations almost exactly inverse.

The recent rise in oil doesn’t neatly fit either model (although this week’s rise was helped by a Kuwaiti oil-worker strike). Instead, it seems to be mostly about reduced fear of extreme outcomes for the economy. Worries earlier this year about recession, China and financial stress receded, helped by signs that lower oil prices were stimulating demand.

But the traditional interpretations may come back into play as $50 draws closer. After the political standoff between Saudi Arabia and Iran at OPEC, it seems unlikely that the cartel will slash production. That leaves the best hope for higher prices with the demand side, if the economy were to start showing signs of strength. Better-off consumers should mean gains for stocks, so there is little to worry about from such a demand-driven oil price rise. Especially as part-drilled shale wells can quickly be finished off, keeping a cap on prices and further reducing the financial stress in the shale sector.

Such a self-reinforcing positive cycle remains no more than hope. But even if oil merely stays roughly where it stands today, investors in stocks should at least be able to stop worrying so much about crude prices and Middle Eastern politics and put their focus where it should be, on earnings and valuations.

Write to James Mackintosh at James.Mackintosh@wsj.com