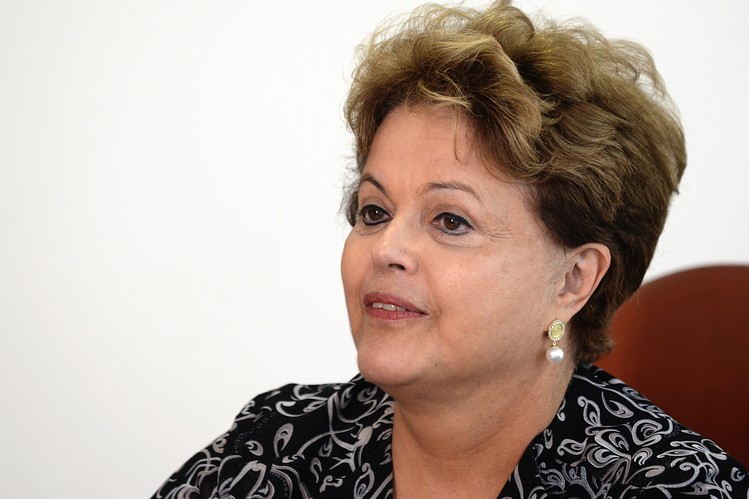 Brazilian President Dilma Rousseff hasn’t been implicated in a widening corruption scandal, but the country;s opposiotion is calling for a probe. ILLUSTRATION: AFP/GETTY IMAGES

BRASÍLIA—Political opponents of Brazil’s President Dilma Rousseff are pressuring authorities to investigate her in connection with a widening corruption scandal that has sunk her approval ratings and threatens to engulf her government.

Opposition leaders are petitioning Brazil’s Supreme Court to give the green light to prosecutors to determine whether the president played a role in a graft ring that allegedly looted millions of dollars from state-controlled oil giant Petróleo Brasileiro SA and funneled bribes to politicians.

Ms. Rousseff has repeatedly denied knowledge of the alleged scam and hasn’t been implicated. Brazil’s Supreme Court, which must authorize probes of high-ranking politicians, didn’t include her this month on a list of 48 lawmakers to be investigated in the scandal, dubbed “Operation Car Wash.” Suspects who cut plea deals have told prosecutors the president benefited from bribe payments. But prosecutors and the Supreme Court concluded that there wasn’t enough evidence to justify a probe of Ms. Rousseff.

But developments this week, including mass street protests against the president and graft charges against a member of her inner circle in connection with the scandal, have emboldened the opposition Brazilian Social Democracy Party, or PSDB, to push for her investigation.

“She nominated these bandits to lead Petrobras,” said Carlos Sampaio, the Social Democrats’ congressional whip in a speech in the Chamber of Deputies Tuesday.

A lawyer representing the Worker’s Party said in a statement Monday that Mr. Vaccari hasn’t participated in any bribe-taking scheme. The party has consistently denied taking any illegal donations.

But the opposition smelled blood. The charges against Mr. Vaccari represent “a new and extremely relevant” development, said PSDB leader Sen. Aecio Neves, who lost a close and bitterly contested presidential race to Ms. Rousseff last year. If the accusations are proved “we will have a different picture in the country,” he told reporters Tuesday.

The Supreme Court this week turned down a request by the Popular Socialist Party, a smaller opposition group, to investigate Ms. Rousseff. The PSDB has now joined that effort and has secured a meeting Wednesday evening with Justice Teori Zavascki, who is overseeing the case for the high court.

It is unclear whether the new request will change the judge’s mind. But the effort keeps the pressure on Ms. Rousseff, who is looking increasingly embattled.

More than a million Brazilians took to the streets in dozens of cities on Sunday, many of them calling for the president to resign or be impeached.

In response, Ms. Rousseff’s party this week began discussions with its allies in Congresson a package of antigraft measures. “We are a government that doesn’t condone corruption,” she said in a speech on Wednesday.

Boosting public opinion will be a challenge for Ms. Rousseff, whose approval rating has fallen to a record low. Just 13% of Brazilians say she is doing a “good or excellent” job, while 62% rate her performance as “bad or terrible,” according to figures published Wednesday by the Datafolha polling firm. Corruption was a top grievance in the protests, according to pollsters.

The president badly needs political capital to approve unpopular austerity measures in congress. Savings are needed to shore up the government’s account to avoid a credit downgrade of its sovereign debt to junk.

Many Brazilians also blame Ms. Rousseff for her handling of Brazil’s economy, which is teetering on recession and suffering from high inflation and rising unemployment.