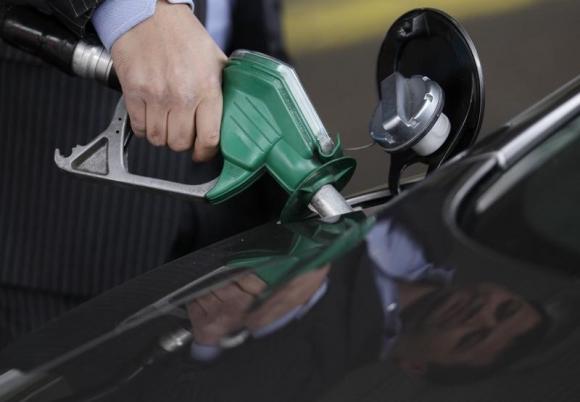 A customer fills his Aston Martin DB9 car at a petrol station, in south London, March 2, 2011.

(Reuters) – Brent oil fell about 3 percent on Monday and U.S. crude hit six-year lows on signs of higher output in the United States and Libya and a possible nuclear deal that could end sanctions for Iran, allowing more of its oil into the market.

A market data provider estimated a fresh build of more than 3 million barrels at the Cushing, Oklahoma delivery point for U.S. crude futures last week, traders said, adding to worries that stockpiles in the United States could hit record highs for a tenth straight week.

In Libya, output has risen to around 490,000 barrels per day, double from a few weeks ago, an industry source said.

The United States and Iran, meanwhile, inched closer to a political deal that would set the stage for a landmark nuclear agreement and removal of sanctions against Tehran, although differences remained. Iran has said it will boost oil exports once the sanctions are lifted.

The selloff extended across the oil futures complex, hitting refined products with gasoline down about 3 percent and heating oil more than 1 percent lower.

“The U.S. is aflood with oil and other production points around the world are not letting up in their output. The question is how much more oil can we take before the storage tanks hit capacity?” said Gene McGillian, senior market analyst at Tradition Energy in Stamford, Connecticut.

The U.S. Energy Information Administration said the country’s oil storage was at around 60 percent to capacity as of Feb. 20.

Brent and U.S. crude fallen over the last two weeks on renewed fears of an oil glut, after February’s rebound from a 60 percent price drop in seven earlier months.

“Any way you slice it, this is bearish for prices,” Societe Generale oil analyst Michael Wittner said.

Goldman Sachs analysts said in a research report that a falling U.S. oil rig count would only bring slightly lower production in the second quarter of this year.