Contributing Editor’s note: Since the first ballot voting last October, the Brazilian Real has suffered a maxi devaluation of over 31% and the YTD tumble has been over 18%. These large percentage corrections are reminiscent of the pre Real Economic Plan days, when inflation was over 90% a month. This is the result of many factors which are listed in the below article. But we must also add that the country is also going through a moral corrections. 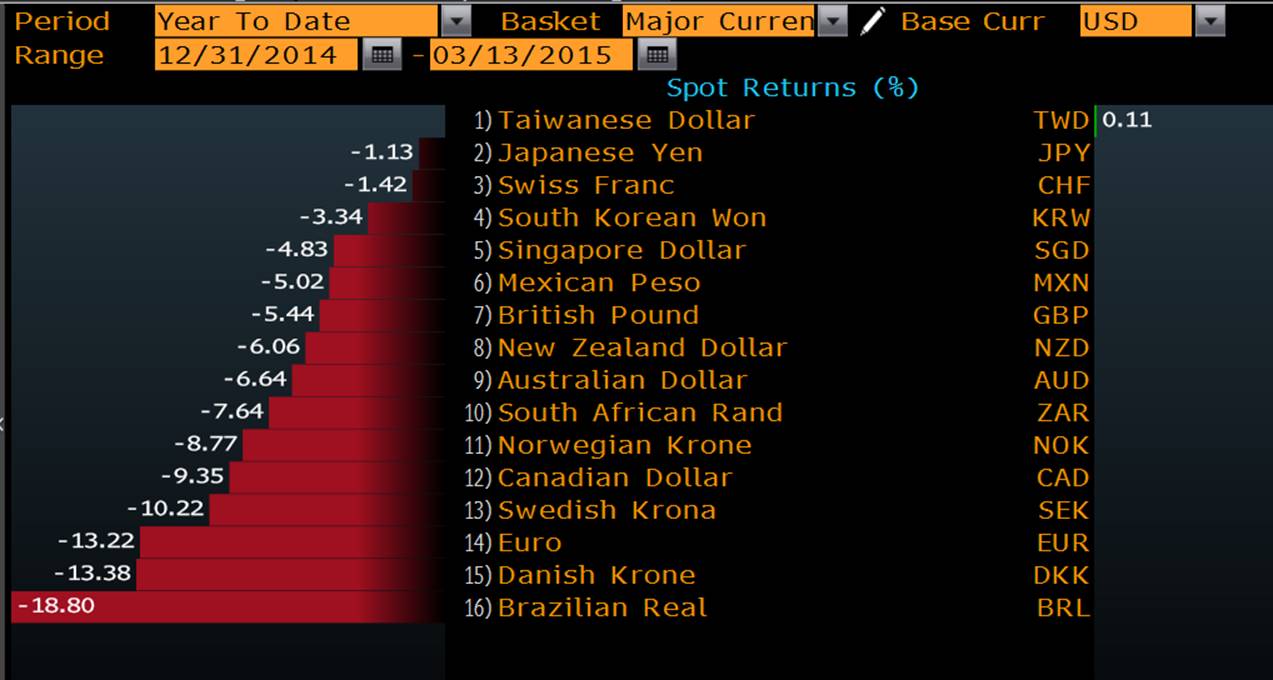 The real fell 2.6 percent to 3.2513 per dollar at 1:13 p.m. in Sao Paulo, the weakest level on a closing basis since April 2003. The currency extended its drop and fell the most among 31 major currencies after a person close to the government’s economic team said Brazil isn’t planning to curb the depreciation.

Concern that Rousseff is struggling to reduce deficits threatening the nation’s investment-grade credit rating pushed the real down 6.5 percent since March 6 in its second straight weekly slide. Unions began protests over pensions Friday, and more than a quarter of a million people have signed up on social media to participate in demonstrations Sunday.

“Persistent concern over the political and economic situation in Brazil should keep pressuring the currency,” Luciano Copi, a trader at Correparti Corretora de Cambio in Curitiba, Brazil, said in an e-mailed note to clients.

The real weakened past 3 per dollar last week for the first time since 2004 as Rousseff faced a challenge from Senate leader Renan Calheiros over a plan to unwind payroll tax breaks.

Moody’s Investors Service cited a stalled economy and fiscal challenges when it put Brazil on negative outlook in September, six months after Standard & Poor’s cut the nation to one level above junk.

Brazil’s currency will find equilibrium, and the central bank won’t attempt to slow its drop, according to the person close to the government’s economic team, who asked not to be identified because discussions aren’t public.

To support the real and limit import price increases, the central bank sold the equivalent of $97.5 million of currency swaps Friday as part of a plan to offer as much as $100 million a day until at least March 31.

Rousseff asked for patience in a televised speech March 8 and said economic measures including higher energy prices as well as reduced labor and pension benefits will produce results by year-end and have a lasting impact on controlling cost-of-living increases.

Also weighing on the currency are allegations that executives at the state-controlled oil company demanded bribes in exchange for work contracts, which have helped to push Rousseff’s approval rating to a record low.

“Given the political uncertainties, the Petrobras probe, protests and the inability to reach agreement on legislation, the fundamental positioning is already BRL negative,” Ipek Ozkardeskaya, a currency strategist at Swissquote Bank in Gland, Switzerland, said by e-mail.

Swap rates on the contract maturing in January 2016, a gauge of expectations for changes in borrowing costs, climbed 0.18 percentage point to 13.96 percent Friday, extending their increase this week to 0.45 percentage point.

The central bank raised the benchmark lending rate last week by a half-percentage point for a third straight meeting, raising it to 12.75 percent, the highest since 2009.