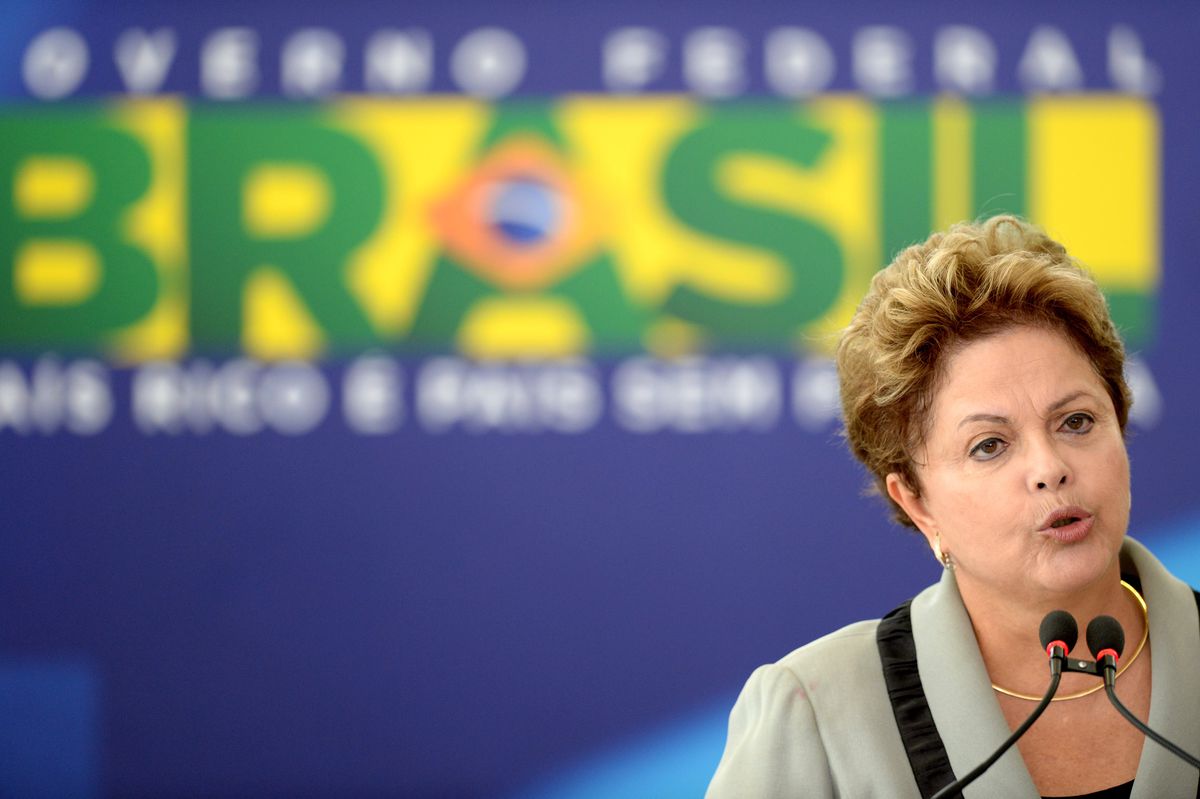 (Bloomberg) — From pot-banging on the streets to defeats in Congress, Brazil’s President Dilma Rousseff hasn’t had a good week defending austerity measures she hopes will fix a broken economy. And it’s about to get worse.

Brazilians in several cities plan to demonstrate on Sunday against corruption and growing economic hardship, demanding Rousseff’s impeachment. More than a quarter of a million people signed up on social media to participate. On Friday, pro-government unions intend to protest labor and pension cuts.

Brazil is one of several Latin American countries where a cocktail of corruption scandals, slowing growth, falling currencies and accelerating inflation is eroding leaders’ popularity as a decade-long commodities boom comes to an end, said Joao Augusto de Castro Neves, Latin America analyst at Eurasia Group. It’s a hard time for Rousseff to be pushing through an austerity package.

“Political risk in Latin America is again on the top of the agenda — the streets clamor for more spending, not less,” Castro Neves said by phone from Washington. “Investors looking at Brazil see uncertainty and a weak government.”

At stake is whether Rousseff will be able to see through measures spearheaded by Finance Minister Joaquim Levy that range from tax increases on items such as fuel and lipstick to cuts in labor and pension benefits. The objective is to prevent a credit-rating downgrade to junk by reducing a budget deficit that nearly tripled during her first term.

Rousseff said this week that any impeachment would require a justification and that Brazilians should recognize the need for stability, accepting last year’s election results.

“Brazilian society won’t accept a break with democracy,” she said.

Brazil’s currency lost 16 percent this year, the worst performer among 24 emerging markets and 16 major currencies tracked by Bloomberg. Much of that fall is due to political risk, said Christian Lawrence, a New York-based foreign currency trader at Rabobank.

“Without a doubt, political stress is taking its toll and is one of the key drivers,” Lawrence said in an e-mailed statement.

More than a dozen company executives have been arrested and 49 politicians are being investigated in an alleged scheme of kickbacks from contractors of state-run oil company Petroleo Brasileiro SA that may have funneled hundreds of millions of dollars to political parties.

In Chile, President Michelle Bachelet’s approval rating in February sank to its lowest since she took office in March 2014 over alleged influence-trafficking by her son. In Mexico, President Enrique Pena Nieto’s approval ratings fell in the wake of home-purchase scandals and the disappearance and probable murder of 43 college students.

In both countries, as well as in Colombia and Brazil, weakening currencies are fueling inflationary pressure and limiting the options of central banks to provide monetary stimulus to accelerate growth.

Rousseff’s challenges are on the streets and in Congress. A rift among her coalition partners jostling for power is exacerbated by fallout from the corruption scandal and dissatisfaction among voters who are seeing their purchasing-power erode.

Following growth that fueled shopping sprees in Miami and made Brazil the world’s fourth-biggest market for cars, consumers are scaling back demand amid the fastest inflation in almost a decade and four consecutive interest-rate increases.

The combination of a corruption scandal at a time of austerity is proving particularly difficult to digest for many Brazilians.

“These people took millions from our oil company and we’re supposed to pay more for fuel?” Fernanda Mouro, a 34 year-old civil servant, said in Brasilia the day a former Petrobras official testified in Congress about pocketing $98 million in bribes over 18 years. “It makes anyone’s blood boil.”

After residents in several cities banged pots and shouted “Out with Dilma” during Rousseff’s televised address to the nation on March 8, the president was jeered while visiting a fair in Sao Paulo. Sunday’s protests, organized by community groups and individuals, are to be preceded on Friday by union-sponsored demonstrations against the president’s austerity measures.

Some members of the ruling Workers’ Party have begun distancing themselves from Rousseff. Senator Marta Suplicy on Monday said in a Twitter post that Rousseff’s attempt to blame the international economy for the crisis was leaving her increasingly isolated from the rest of society.

The presidential press office didn’t respond to an e-mailed request for comment when asked about Rousseff’s relationship with the party.

No evidence has surfaced that Rousseff, who was chairman of Petrobras between 2003 and 2010, was directly involved in the Petrobras scheme. The prosecutor general said the president can’t be held responsible during her current mandate for acts preceding it. She denies wrongdoing.

Still, impeachment hearings in Congress are more political than legal in nature and any possible proof that her election campaign was funded by Petrobras kickbacks could turn the tide against her, said Brasilia-based political analyst Andre Cesar.

Pedro Barusco, a former Petrobras manager who turned state witness, testified in Congress this week that Rousseff’s Workers’ Party received as much as $200 million from Petrobras contractors. The party said all donations it received were legal.

Under Brazil’s constitution, two-thirds of the lower house of Congress must approve impeachment proceedings. If the grounds are criminal, the Supreme Court decides. The Senate rules on charges of “responsibility” such as neglect.

While a growing scandal and deteriorating economy will further pressure the real and increase volatility in the equity market, the currency and economic outlook should gradually improve, Jorge Mariscal, emerging markets chief investment officer at UBS Wealth Management, said by phone.

“Our base scenario is that some of this noise will dissipate and Levy will achieve a significant chunk of his target,” Mariscal said. “If you had hundreds of thousands of people in the streets and opposition parties saw a clear benefit from it, impeachment could potentially happen, though it would still face very challenging legal headwinds.”

Unlike her predecessor Luiz Inacio Lula da Silva, Rousseff lacks the charisma and economic track-record that helped him bounce back from threats of impeachment in a 2005 cash-for-votes scandal to be re-elected a year later, according to Nicholas Spiro, managing director at Spiro Sovereign Strategy.

There is “a hornets nest of political, financial and economic problems at a time when Brazil’s investment grade status is hanging by a thread,” Spiro said by phone.

More than three-quarters of respondents in a Feb. 3-5 Datafolha poll said Rousseff knew about the corruption and either let it happen or couldn’t do anything to stop it.

In the run-up to this weekend’s protests, former President Fernando Henrique Cardoso said in an interview with Estado de S. Paulo newspaper that his PSDB party, the country’s main opposition force, had no intention of pursuing an impeachment, which he considered undesirable and unlikely.

“Impeachment is like an atomic bomb. It’s for deterrence, not to be used,” Cardoso said.

That constant threat and the prospect of growing protests will be enough to keep investors on edge for some time, said Spiro.

“It’s hard to see a ray of light here, a recovery of her authority to push the economic agenda forward.”