With Petrobras mired in the biggest corruption scandal in Brazil’s history, money has stopped flowing to many of its contractors. The CEP consortium building the shipyard for Enseada, with 82 percent of construction complete, has suspended work due to a “liquidity crisis,” according to Enseada. CEP had 5,227 workers last June, and now it has 156. Enseada fired 1,800 workers since November, and about 600 workers continue to build rigs in the unfinished yard. 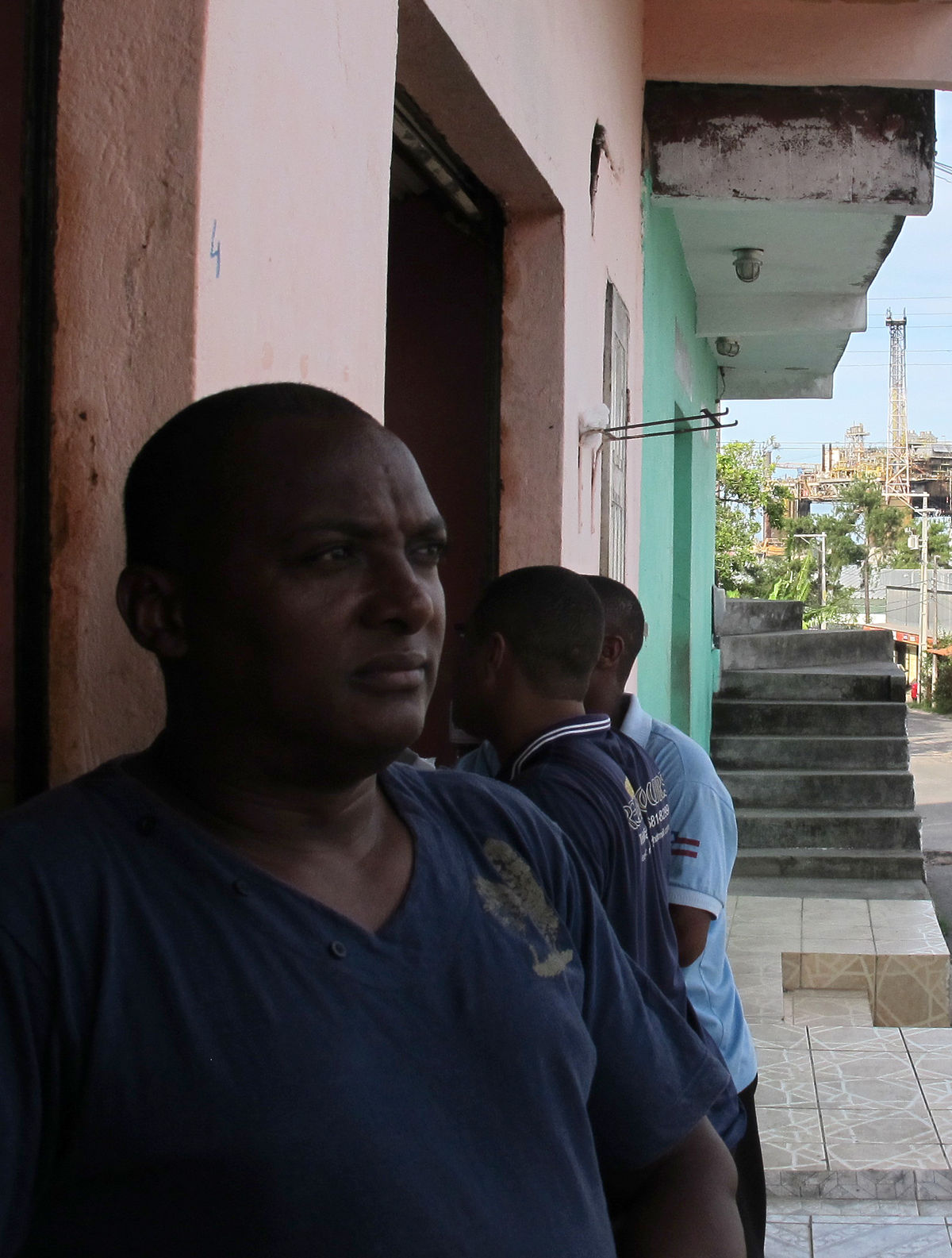 Fernando Neri, a city councilman in Maragogipe where the Paraguacu shipyard is located, says some fired workers have returned to traditional fishing. Photographer: David Biller/Bloomberg

“She screwed up,” Neri, 37, said while sipping a beer in a sleepy plaza of Maragogipe, in Bahia state. “I ask myself if when she hands over the government, it’s going to be in debt and there won’t be employment in Brazil.”

Neri’s malaise spells trouble for Rousseff. Throughout her re-election run she invoked record-low unemployment as proof of her successful economic policies, even as growth stalled and inflation accelerated. Now, joblessness is finally on the rise – – and so is discontent, even in the northeast region that has long been the stronghold of her Workers’ Party.

“From a political standpoint nothing is more damaging to the popularity of the government and Dilma than the rising unemployment rate -– much more than inflation, much more than the recession,” Alberto Ramos, chief Latin America economist at Goldman Sachs & Co., said by phone from New York. “That tends to impart the highest political cost for government in Brazil, and the trend is to continue to deteriorate.”

During the campaign, Rousseff warned voters that an opposition victory would mean a return to the past: more joblessness, faster inflation, higher interest rates. After winning by 3.3 percentage points, the tightest margin since at least 1945, she shifted tack with the appointment of Finance Minister Joaquim Levy.

His task is unpopular: the man nicknamed “Scissorhands” for his cost-cutting penchant must shore up fiscal accounts to rebuild investor confidence and avert a downgrade of Brazil’s credit rating to junk. His team has already raised some taxes, cut spending, and proposed to tighten rules governing unemployment insurance and pensions.

The central bank, for its part, has raised the benchmark rate to the highest in six years to rein in inflation that’s at its fastest in nearly a decade. The economy is set to contract 0.66 percent this year after virtual stagnation last year, according to economists surveyed by the bank.

Higher borrowing costs are hitting the labor market, according to Jankiel Santos, chief economist at Sao Paulo-based investment bank BESI Brasil. Unemployment in January jumped to 5.3 percent, the highest level since 2013, from 4.3 percent in December. The nation lost 82,000 jobs in January, nearly quadruple the median estimate of economists surveyed by Bloomberg. The auto industry, a mainstay of the economy, has shed almost 11,800 jobs over the past year, with 1,900 in February alone, according to the carmakers’ national association, Anfavea.

The jobless rate will peak this year at a four-year high of about 6.5 percent and reach about 7.5 percent next year, signifying yet another headwind for an economic model that over the past decade has been based on consumption, Santos said. In Salvador, the capital of Bahia state across the bay from Maragogipe, unemployment already stands at 9.6 percent.

Rousseff defended her policies in a Feb. 25 speech in Feira de Santana, a city in the interior of Bahia state, inaugurating a low-income housing project. “I make adjustments to my government like a mother does in her house,” she said. “What we need now are conditions to restart a new cycle of economic development. Why? To generate more jobs, ensure more income.”

With Petrobras mired in the biggest corruption scandal in Brazil’s history, money has stopped flowing to many of its contractors. The CEP consortium building the shipyard for Enseada, with 82 percent of construction complete, has suspended work due to a “liquidity crisis,” according to Enseada. CEP had 5,227 workers last June, and now it has 156. Enseada fired 1,800 workers since November, and about 600 workers continue to build rigs in the unfinished yard.

On March 2, union members assembled outside the Labor Ministry in Salvador to protest rising joblessness and the government’s cost-cutting measures. Bahia state’s heavy construction union, Sintepav, says it has lost 5,000 jobs in road building over the last six months, in addition to the thousands lost at Maragogipe. They’re set to demonstrate again on March 13.

“We elected Rousseff, so we’re the ones who have to hit her,” Irailson Warnaux, the union’s vice-president, said in an interview in Salvador. On his desk, a framed newspaper clipping featured a photo of a union member with Rousseff.

Last year the president garnered an overwhelming 71.6 percent of votes in the northeast. Now her government’s approval rating there has plummeted 24 percentage points — more than in any other region — to 29 percent, according to a poll of 4,000 people conducted by Datafolha from Feb. 3-5. The national rating dropped to 23 percent from 42 percent in December. The survey had a margin of error of plus or minus two percentage points.

Francisco Fernando de Jesus, 36, worked building and reforming McDonald’s restaurants for a Salvador-based construction company until January, when he and his crew were fired. His unemployment comes as Rousseff’s policy adjustments cause prices to jump for everything from water to electricity and gasoline, and he plans to protest.

“I voted for Dilma, but I didn’t expect her second term to be so harmful to the people,” De Jesus said at his union headquarters, where he came to sign severance paperwork. “It’s really bad. I hope this year she loses her job.”

Activists on Facebook are organizing March 15 demonstrations in cities nationwide, with some calling for Rousseff’s impeachment. While protesters who sign up online always dwarf the number who actually attend, hundreds of thousands have registered. When the president addressed the nation on TV Sunday and asked for patience with her new economic policies, residents in more than a dozen cities shouted protests out their windows and banged on pots and pans.

With Rousseff’s popularity plunging, her government will have difficulty winning approval for unpopular economic measures in a fractious Congress that senses her weakness, said Thiago de Aragao, partner and director of strategy at Arko Advice, a Brasilia-based political risk company. That could make it harder to avoid a sovereign downgrade, he said.

Standard & Poor’s in March lowered Brazil’s credit rating to one level above junk. Moody’s Investors Service six months later reduced the outlook on its Baa2 rating to negative. That is the second-lowest investment grade. Since the latter occurred, yields on Brazil’s sovereign debt have gone up 89 basis points to 5.5 percent, compared with an average 57-basis-point increase for emerging markets, according to data compiled by JPMorgan Chase & Co.

The loss of thousands of jobs building the Paraguacu shipyard has hit the town of Maragogipe hard. There’s nothing victorious about the Praca Victoria main square: stores and inns are shuttered. Old men play dominoes at the only open bar. A dog lies in the middle of the street gnawing its mange.

Men who took out loans to buy cars and homes are staggering under debt burdens with growing interest rates, and some have returned to traditional fishing they thought they’d left behind forever, said Luciano Neri’s brother Fernando, a city councilman.

“I was dreaming that there were going to be other means, that our sons could study and get more dignified work with this undertaking,” Fernando said, referring to the shipyard. “But it ended overnight, and we end up burying our dreams again. It’s regrettable.”