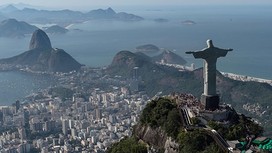 By Joe Leahy and Samantha Pearson in São Paulo

The South American currency weakened 1.3 per cent against the dollar to R$3.1039 in midday trade, its lowest level on a closing basis since June 2004.

It has fallen by 14.5 per cent since the start of 2015, one of several emerging market currencies to come under pressure in recent months from sliding commodity prices, a stronger US dollar and domestic economic weakness.

The real’s latest drop followed a tumultuous weekend in Brazilian politics in which a speech by President Dilma Rousseff seeking to convince her countrymen of the need for fiscal austerity provoked protests in major cities. Meanwhile prosecutors launched investigations into a group of 54 senior political figures over a scandal at state oil producer Petrobras.

“The hostility in Congress is getting worse by the day and it casts doubt on the planned fiscal adjustments,” said Silvio Campos Neto at Tendências Consultoria, a São Paulo-based consultancy.

Ms Rousseff faces a near perfect storm just five months after winning a second presidential term by one of the narrowest margins in Brazil’s recent history.

The country’s economy is expected to sink into recession this year amid rising inflation, just as political concerns mount over the Petrobras affair. Former company executives at the oil company are accused of colluding with politicians, mostly from the coalition government, to extract bribes from Petrobras contractors.

Although she campaigned on a leftist platform eschewing the need for austerity, Ms Rousseff’s first move in her second term was to launch a programme of budget cuts and tax and interest rate rises to set the country’s public finances back on track.

Brazil recorded its first primary fiscal deficit — the deficit before interest payments — in more than a decade years in 2014 after the government introduced fuel and energy subsidies and tax breaks to maintain jobs and suppress inflation to help win the election.

On Sunday night, Ms Rousseff gave one of her first addresses to the nation since her re-election and one of her first appearances publicly supporting the austerity programme, calling on all Brazilians to back the belt-tightening.

“The measures are being applied in such a way that people, companies and the economy can bear them,” Ms Rousseff said in the speech. “As this needs to be done equitably, everyone must do their part. But in accordance with their means.”

The speech was greeted with a popular protest in many large cities in Brazil’s rich southeast and in Brasília, regions where the left-leaning president mostly performed poorly in the October election.

Organised through social media, people banged on pots and pans in their apartments, blew car horns and set off car and house alarms, in a type of protest known as “panelaço”, to mark their distaste for the speech.

“I left my TV on mute — rather than listen to rubbish,” said lawyer Luciana Rufino while shopping on Avenida Paulista, São Paulo’s main thoroughfare, on Monday.

But supporters of Ms Rousseff’s party, the PT, defended the speech and described the protesters as spoiled bourgeoisie mostly living in rich neighbourhoods who are in favour of a “coup” to overthrow the current government.

José Américo Dias, the PT’s national communications secretary, said there was evidence opposition political parties paid for the protest. “The circulation on social media of sophisticated film clips [of the protest] indicates the presence of opposition party finance in this movement,” he said.

Markets, meanwhile, are concerned over whether Ms Rousseff will be able to persuade Congress to support her fiscal measures after public prosecutors on Friday received permission to launch investigations into politicians in relation to the Petrobras scandal.

The politicians include the two most senior members of the Congress — Eduardo Cunha, head of the lower house, and Renan Calheiros, head of the Senate. Although they belong to the PMDB, an important party in Ms Rousseff`s ruling coalition, they are unhappy with their inclusion on the list and are jockeying for more power in the government.

They have already blocked one fiscal austerity measure proposing a rollback of some tax breaks on payrolls to help increase government revenue.

However, some analysts said the government should be able to implement much of its austerity measures without going through Congress, alleviating in part the political risk to the programme.

“A good portion of the government’s fiscal adjustment can be conducted independently of Congress,” said Chris Garman of Eurasia Group in a note.