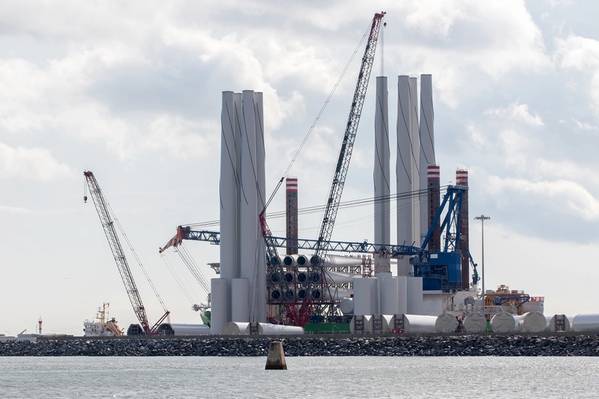 (OE) Most of the media coverage of offshore wind development in the United States focuses on the leases of the offshore areas where the wind turbines will be located. However, equally important is the landside dimension of these projects, including the manufacture, installation, maintenance and operation of the turbines. Several awards made in the last two rounds of funding under the Port Infrastructure Development Program (PIDP) show how offshore wind now offers an additional direction of port development for which funding is available. Also, the recently enacted Inflation Reduction Act of 2022 (IRA) provides ports and operators with opportunities to modernize and reduce greenhouse gas emissions.

The PIDP
The PIDP was created by Congress in 2010 to give ports their own grant program for projects to more safely, efficiently, and reliably move goods into, out of, around, and within a port. The program is administered by the Maritime Administration (MARAD) within the U.S. Department of Transportation.

The program began receiving substantial funding each fiscal year (FY) since FY 2019, culminating in the Infrastructure Investment and Jobs Act, which designated $450 million for the PIDP annually for five years, beginning in FY 2022. An additional $234 million was made available to the program under the FY 2022 Consolidated Appropriations Act. Reallocated funds from the FY 2021 PIDP also remained available, resulting in a total of $703.1 million in PIDP grant funding available for award in FY 2022.

FY 2021 PIDP grants
Among the recipients of awards under the FY 2021 PIDP funding round were two ports with projects directly related to offshore wind. Each project is expected to create hundreds of quality jobs for the region and will play key roles in U.S. efforts to secure an offshore wind energy supply chain.

In December 2021, MARAD awarded the Port of Albany on the Hudson River in New York a PIDP grant of $29.5 million for a project to help meet the expected needs of offshore wind projects in the Northeast United States. The scope of the project included the design and construction of the infrastructure necessary for 81 acres of a vacant industrial area along the Hudson River to be used for a wind tower manufacturing facility and as a port capable of handling the towers and other heavy cargo used in offshore wind installations.

Also in December 2021, the Virginia Port Authority was awarded a PIDP grant of $20 million to fund improvements to the Portsmouth Marine Terminal to enable it to serve as a staging area in support of offshore wind projects. The grant will fund creation of a wind turbine generator staging area and a second storage area where monopiles and other project components will be stored.

FY 2022 PIDP grants
In the latest PIDP funding round, announced by MARAD on October 28, three more ports were awarded grants for offshore wind projects. The Bridgeport Port Authority in Connecticut was awarded a grant of $10.5 million for the design and construction of an operations and maintenance wind port. The project elements include the installation of anchored bulkheads and a floating service dock for offshore wind support vessels, dredging to deepen the harbor to accommodate larger support vessels, and the installation of two crane pads.

The Salem Harbor Port Authority in Massachusetts was awarded a grant of $33.8 million for its Salem Wind Port Project. The project includes the construction of a 700-foot-long wharf and bulkhead to handle oversized and heavy cargoes and to serve as a loadout and assembly location. It also includes improvements to 23 acres of adjacent uplands to create a laydown area for the loadout and assembly space.

Finally, a grant of $48 million was awarded for the Arthur Kill Offshore Wind Terminal Project on Staten Island, N.Y. This project will include dredging to create a 35-foot-deep ship basin to support further development of the adjacent 32-acre site as a purpose-built offshore wind staging and assembly facility. This facility will include a 1,365-foot-long wharf with an adjacent laydown area having enhanced load-bearing capacity and two program areas.

On December 7, the Department of the Interior announced results from BOEM’s wind energy auction for five leases covering 373,268 total acres off Central and Northern California. The sale drew competitive high bids from five companies totaling $757.1 million, exceeding the first lease sales that were held in the Atlantic region. The lease sale represented the third major offshore wind lease sale in 2022 and the first ever for the Pacific region.

These steps reflect the growing prospects for offshore wind development in the Gulf of Mexico and the Pacific Ocean. They suggest that opportunities may soon arise for ports in those regions to follow in the footsteps of their East Coast counterparts in the pursuit of PIDP funding for offshore wind projects.

Commitment to port infrastructure and greenhouse gas reduction
Along those same lines, Congress has consistently provided incentives for port owners, operators, and tenants to improve port facilities, and the recently signed into law IRA is no exception. Specifically, Section 60102 of the IRA provides a sizeable investment of $2.25 billion over the course of five years to the Environmental Protection Agency to fund projects that will “reduce air pollution at ports.” The IRA also appropriates a separate $750 million for rebates and grants for ports located in nonattainment areas, i.e., areas considered to have air quality worse than the National Ambient Air Quality Standards. Similar to other federal grant programs, most of these funds will be awarded on a competitive basis.

Eligible recipients include port authorities; a state, regional, local or tribal agency that has jurisdiction over a port authority; an air pollution control agency; or a private entity that partners with any of the other recipients and also “owns, operates or uses the facilities, cargo-handling equipment, transportation equipment or related technology of a port.” Bottom line: If you work with or on a port and have a plan to reduce greenhouse gas emissions at that port, you can submit an application.