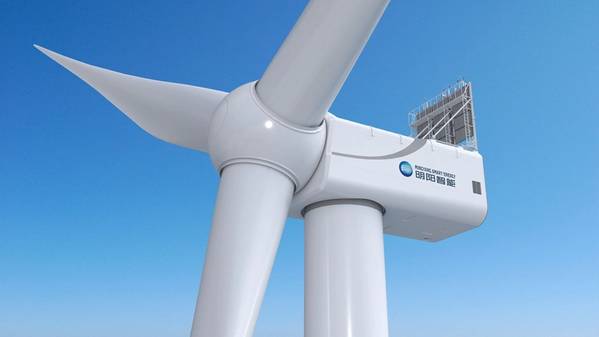 “Under an annual average wind speed of 8.5m/s, each turbine can generate 80 GWh of electricity per year, sufficient to supply 96,000 residents, while reducing CO2 emissions by 66,000 tonnes,” the company said in a social media post.

“Going beyond the 18MW threshold, MySE 18.X-28X is the epitome of Mingyang’s consistent innovations and comprehensive upgrade on the proven hybrid-drive technology.

“The modular and lightweight design, as well as the use of holographic sensing MPC and digital twin DTC technology, serve as the basis for MySE18.X-28X’s intelligent, efficient, and reliable operations against the most extreme ocean conditions, such as a level-17 typhoon with wind speeds >56.1 m/s,” Mingyang said.

“With the new MySE 18.X-28X, Mingyang has taken a major step toward accelerating the green energy transition by driving LCoE reductions and technological breakthroughs for the offshore wind industry,” Mingyang added.

The company did not say when the construction of the first MySE 18.X–28X units would start.

Interestingly, this is the second 18 MW offshore wind turbine announcement from a Chinese developer in less than a week.

Namely, China’s CSSC Haizhuang said it is working to build the H260-18MW offshore wind turbine, which it said would break a global record with an 18MW capacity rating. The turbine will have a giant 260-meter-diameter rotor.

According to CSSC Haizhuang, the H260-18MW offshore turbine has a swept area of 53,000 square meters, equivalent to the area of seven standard football fields.