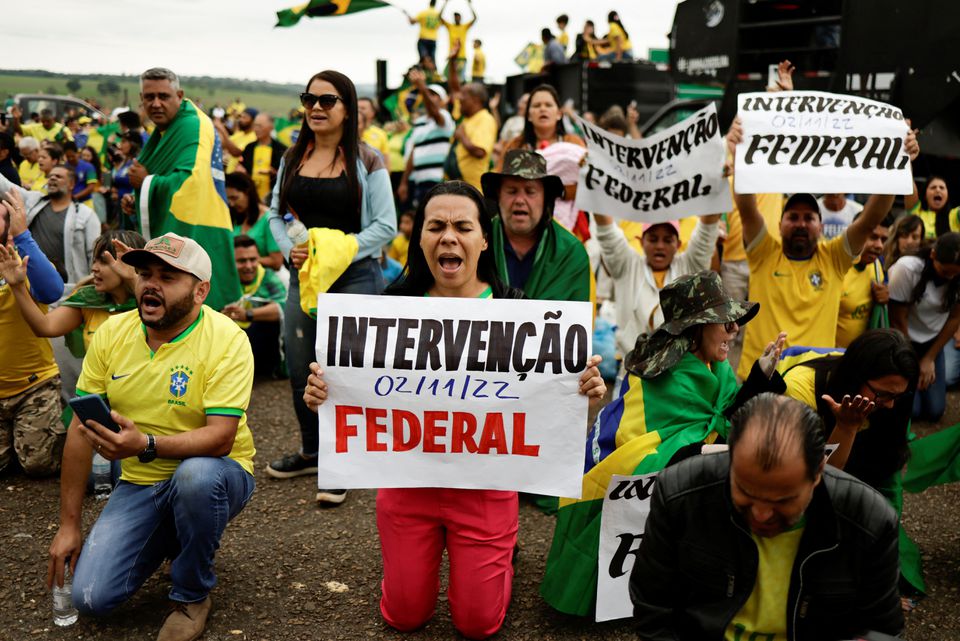 Organizers of the anti-government demonstrations have called in recent weeks on social media to block roads and refineries, bring down power lines and cause enough chaos to prompt a military coup to overturn the election that Bolsonaro lost.

“We have measures for this Wednesday to reinforce security throughout the country since pamphlets of new demonstrations have been circulated,” Lula’s chief of staff Rui Costa said late on Tuesday after a cabinet meeting.

Ricardo Cappelli, the federal official in charge of public security in the capital since Sunday, said all security forces had been mobilized to prevent protests and that there would be no repeat of rioting.

“Those who lost the election and are trying to create a crisis will not succeed,” Cappelli told a news conference.

Lula said on Wednesday that those involved in Sunday’s attack would have the right to defend themselves but any proven wrongdoing will be punished. He also criticized Bolsonaro for not accepting the election result and called those who stormed and vandalized public buildings in Brasilia “crazy”.

So far, 727 of the over 1,500 involved in Sunday’s riots have been imprisoned. Nearly 600 have been released for “humanitarian reasons” – mainly the elderly, people with health issues and parents of young children, according to a federal police statement.

Supreme Court Justice Alexandre de Moraes issued a ban on roadblocks that have been used by anti-government demonstrators to create economic disruption and ordered local authorities to prevent the storming of public buildings.

The judge also agreed to a government request to fine companies found to be financing the logistics of demonstrations blocking public roads or storming public buildings.

Torres was fired for his failure to stop Sunday’s chaos and his arrest warrant alleged complicity with the demonstrators, who marched to the center of the capital under police escort.

“So far, despite the polarized environment, evidenced by a violent invasion of Brazil’s state buildings on Jan. 8, we see reasons to believe that governability will not be an immediate issue,” economists at JPMorgan said.

On Sunday, thousands of Bolsonaro supporters stormed the capital, ransacking the Supreme Court, Congress and presidential offices in the worst assault on democratic institutions since a military dictatorship ended in 1985.

Bolsonaro, who left Brazil 48 hours before his term ended and has yet to concede defeat to Lula in the October elections, said on social media from Florida that he planned to return to Brazil earlier than planned for medical reasons.

In his most explicit public attack on the legitimacy of October’s election since losing it, Bolsonaro posted a video on social media late on Tuesday saying Lula had lost the vote.

The post disappeared soon afterward. The former president, whom Lula has blamed for inflaming the protests, did not mention Sunday’s riots. Bolsonaro’s son, Senator Flavio Bolsonaro, has said he cannot be blamed for the violence because he has been so limited in his public comments.

Torres was also not in the city during the riots, having flown to Florida earlier this month. He said on Twitter on Tuesday that he had always said he would return to Brazil from Orlando, where he was vacationing with his family, and turn himself in to justice.

Moraes also ordered the arrest of Fabio Augusto Vieira, the head of Brasilia’s military police, one of a number of officials responsible for protecting government buildings in Brasilia.

Authorities restored order in Brasilia on Monday and soldiers dismantled a camp outside army headquarters where Bolsonaro supporters had called for a military coup since Lula won the elections in October. More than 1,000 people were arrested and were being questioned by police.