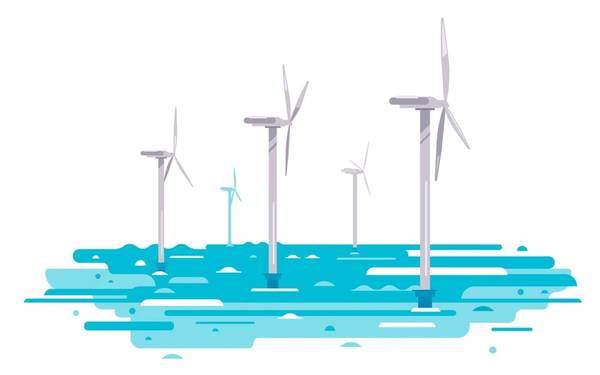 (OE) The Crown Estate for England, Wales, and Northern Ireland has announced its first major investment in surveys to help with the construction of floating offshore wind farms in the Celtic Sea.

“The awarding of the first contracts marks an important step in what is anticipated to be a multi-million pound series of technical and environmental surveys around potential locations for new floating wind farms,” the Crown Estate said.

The Crown Estate has set a target for an initial 4 GW of floating wind capacity in the Celtic Sea by 2035, with the region assessed to have the potential to accommodate up to 24 GW by 2045.

“This would be one of the first uses of new floating wind technology on a commercial scale, with further rapid growth expected as the technology, supply chain, and infrastructure mature,” the Crown Estate said.

“By investing in these surveys at an early stage and making the data freely available to successful bidders, The Crown Estate is aiming to accelerate the delivery of projects, making it easier for developers to take early decisions and manage risk, while supporting future project level Environmental Impact Assessments (EIAs) as part of the planning process,” The Crown Estate added.

“Over the last year, The Crown Estate has been working with its technical advisors, alongside industry and other stakeholders, including statutory nature conservation bodies, to develop a program of surveys which will deliver strong, reliable, and useful datasets for developers.

“Precise specifications will be kept under review as the program progresses, but will cover a range of important areas, including the geophysical and geotechnical properties of the seabed, wind, wave, and current patterns, and marine wildlife,” the Crown Estate said.

“As well as providing successful bidders with easy access to vital data and speeding up the development process, it is hoped the program will avoid the need for developers to conduct additional surveys later in the process, while making best use of limited specialist survey resource,” the Crown Estate added.

Contracts have now been signed for the first phase of metocean surveys, which look at wind, wave, and current patterns, to start in spring 2023, according to the Crown Estate. The Crown Estate is progressing with the procurement of the remaining surveys over the coming weeks and months, subject to further commercial discussions.