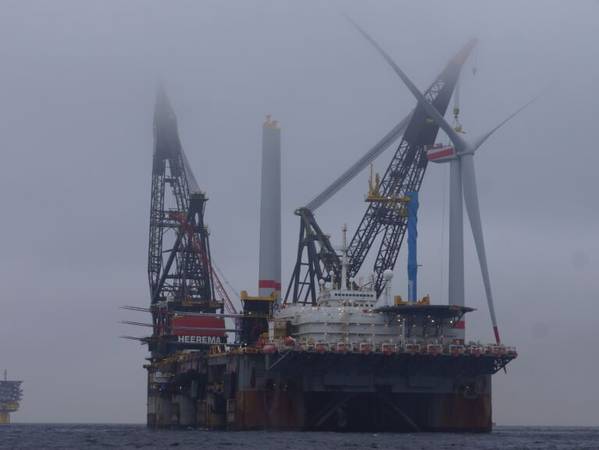 Heerema Marine Contractors has recently installed the first of 27 Vestas V174 – 9.5MW turbines at the Arcadis Ost 1 offshore wind farm in the Baltic Sea, offshore Germany, using a floating installation method, for which the parties involved say is unique.

Namely, the turbine was installed using Heerema’s Thialf semi-submersible crane vessel instead of the typical method using a jack-up vessel.

The plan to use a floating installation method  for Parkwind’s Arcadis Ost 1 was announced for the first time in November 2019.

After almost 3 years of development and engineering, the companies in November executed the floating installation of the first Arcadis Ost 1 turbine.

According to the parties involved, the floating installation method has two main advantages; the first is zero seabed interaction especially important in areas of significant water depth or challenging soil conditions; the second advantage is a shorter installation cycle.

According to Parkwind, to speed up the installation process, assembly and lifting operations are happening in parallel.

One of the Thialf’s two main cranes lifts the pre-assembled WTG-tower to the foundation, while the second main crane is used to pre-assemble the WTG in parallel.

For the latter, Heerema developed a method where the Rotor Nacelle Assembly lift takes place on a so-called “support” tower on board of the crane vessel.

The support tower provides a stable platform to allow a fast and secure assembly of the nacelle and the blades, Parkwind explained.

Once pre-assembled the complete Rotor Nacelle Assembly is lifted as one piece onto the WTG tower in only one lift.

“The pre-assembly process on board the Thialf ensures full control thereby guaranteeing a safe and highly reliable installation environment. The reduced number of lifts between the vessel and the structure eliminates key risks of the floating installation. Vestas has delivered RNA lift-feasible components by developing new tools to support the offshore floating installation,” the press release issued by Parkwind states.

The Arcadis Ost 1 is a 257 MW wind farm developed by Parkwind, located in the German territorial waters of the Baltic Sea, northeast of the island of Rügen and will generate enough electricity to power the equivalent of up to 290,000 households. It is Europe’s first wind farm equipped with Vestas’ V174-9.5MW turbines and Parkwind’s first international project. The offshore wind farm’s final commissioning is planned in 2023.