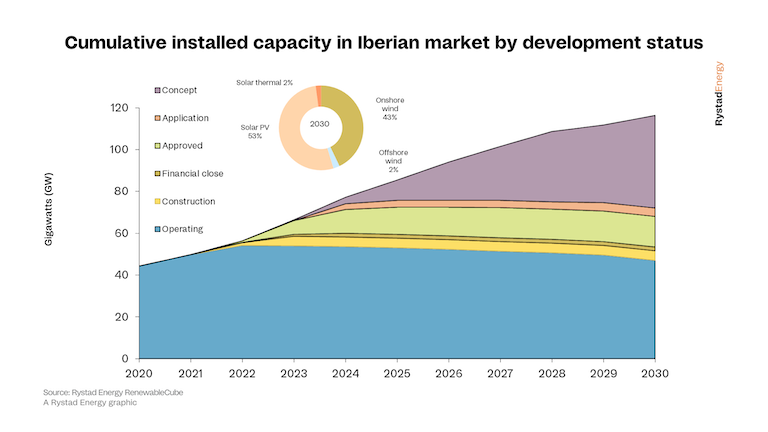 (OM) Iberia is well positioned to compete with—or even replace—Northern Europe’s existing energy industrial hub as sectors in Spain and Portugal can call on abundant sunshine, strong winds and mature gas infrastructure as well as a wealth of industry and managerial expertise. With reliable gas supply from North Africa, lower power prices compared to the rest of Europe, and a renewable energy pipeline that stands out on the continent, Spain and Portugal have the potential to evolve into a new European energy powerhouse, according to Rystad Energy research.

As a pioneer in the European wind industry, Spain is the second largest generator of renewable power in Europe.

In Portugal, Rystad says offshore wind is headed for a bright future as the government announced last month it will boost the country’s offshore wind target from 6 GW to 10 GW by 2030, which will most likely be awarded through auctions.

The Iberian Peninsula has more than 50 GW of installed capacity, with more than 60% coming from onshore wind—and it will not end there. The region has ambitious plans, Rystad says, and with the National Integrated Energy & Climate Plan, Spain aims to source 74% of its power from renewables by 2030. Solar PV installations have climbed rapidly in recent years, and this is expected to further accelerate. If all goes as planned, solar PV installations will catch up with onshore wind installations and make up more than half of the region’s renewable energy by 2030.

It was revealed late last week that the MidCat gas-pipeline project, which would have run from Iberia to Central Europe and was expected to have annual export capacity of 8 Bcm, has officially been abandoned and will be replaced by a new project called BarMar.

The new project is a subsea gas pipeline from Barcelona in Spain to Marseille in France that will gradually replace fossil fuel in the system with renewable gases such as green hydrogen.

The prime ministers of Portugal, Spain and France will meet in December to discuss financing of the project.

This is not the first time hydrogen has been placed on the agenda for exporting Iberia’s renewable potential to help Europe wean itself off natural gas. Another corridor for green hydrogen trade is being planned by Cepsa between Algeciras in Spain and Rotterdam in the Netherlands, while Shell plans a hydrogen supply chain between Sines in Portugal and Rotterdam, to name just two potential projects.