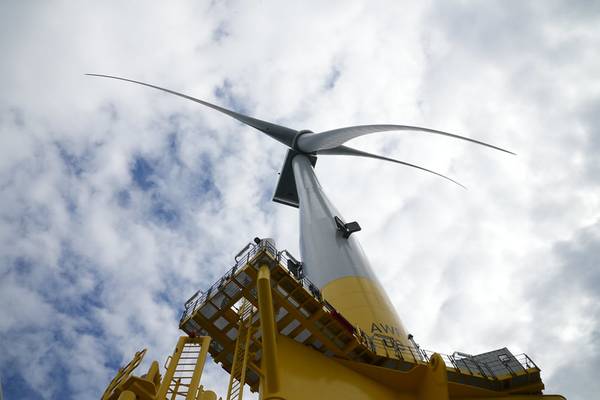 (OE) Industry interest in floating offshore wind in the UK has seen rapid growth, but a race to the bottom in terms of cost, as well as port and manufacturing capacity, could mean targets are not met and challenge the long-term sustainability of the industry.

These issues were raised at the sell-out Floating Offshore Wind 2022 conference and exhibition in Aberdeen today (October 12).

The event came as co-organizer RenewableUK revealed a report showing that the total pipeline of floating offshore wind projects has more than doubled in the past 12 months, in terms of capacity worldwide, from 91GW to 185GW. The number of projects has also increased globally during that time, from 130 to 230.

The UK’s pipeline, specifically, has increased from 23GW a year ago to over 33GW, and from 29 projects to 51, with projects being developed in the North Sea, Celtic Sea, and the North Atlantic.

But there are concerns about how these projects will progress. Keynote speaker Tim Pick, co-chair of the Offshore Wind Acceleration Taskforce, highlighted that offshore wind buildout has slowed from 40 months since lease at FID to 140 months. He said ten-year cycles need to be brought back down to five to six years, otherwise, goals for 50GW of offshore wind in the UK by 2030 will be hard to meet.

Current projections by RenewableUK’s Pulse Energy report suggest 44GW by the same date would be generous, he said, with question marks also over grid connections to get the power to where it’s needed.

Rebecca Williams, Global Head of Offshore Wind at GWEC, told the event that the UK was leading the way in floating offshore wind, but that other countries were “nipping at its heels”, notably the US, where California has a lot of ambitions, such as targeting 25GW by 2045. She says South Korea is also really ambitious and has the framework to make that happen. Taiwan and Japan, which have a new auction round coming and are centralising their markets, respectively.

Pablo Necochea, Lead Advisor Floating Wind, Vestas, said that the industry is ready to enter the commercial phase for floating offshore wind. “What’s stopping us is manufacturing and the rate of manufacture of those floaters,” he said. “If the UK is to keep its leadership position, we need to look at APAC where Korea specifically is looking at diversifying its infrastructure in oil and gas and shipbuilding and aggressively putting policies in place so they have the right price level to support this technology and develop these projects.”

Alan Hannah, Senior Vice President and Partner, Copenhagen Offshore Partners, said that, while there is a lot of positivity, there are a lot of challenges too, with consumer prices going up, Ukraine, which has increased steel prices, changes in the UK government with different policies and a consultation on the wholesale electricity market design, which could bring about “generational change”.

This means there are challenges from an investor perspective, he says, across the entire energy space. “Floating is able to solve some, if not all, of these problems,” he said. But we need to get floaters into the water and we need standardisation and industrialisation to get LCOE down, he says.

Another challenge is port capacity. Hannah says the UK is in a unique position in terms of its ports, but they need a business case to invest and certainty to make that investment.

Gabriel Davies, who runs Orsted’s Global Floating Offshore Wind Programme, said that investing in deepwater infrastructure is critical for this to happen.

However, Williams said that focus shouldn’t just be on ports but that “we should recognize this is part of a much wider industrial strategy.”

There was also broad consensus that a recent “clearing price” for the only contract for difference (CFD, a funding mechanism in the UK) awarded to date for floating offshore wind was too low and this risked a “race to the bottom” in terms of levelized cost of energy (LCOE), a key metric, which would damage longer-term industrialisation goals and set too low a bar for international markets, making floating wind less investable and loosing focus on what will happen beyond 2030 goals.

Richard Eakin, Scotwind project director at ScottishPower Renewables, agreed and said that CFDs had driven down cost at a pace the local supply chain was perhaps not comfortable with in previous rounds. “Moving forward, it has to be done in the right way and not in a rapid race to the bottom and getting bits and pieces from anywhere in the world that is cheapest, and that’s not what we want to do,” he said.

Williams also said that the CFD shouldn’t be looked at as the only support mechanism and noted other mechanisms such as concessional financing to find other parts of infrastructure.

Melissa Read, UK business manager, offshore wind, at Shell, said “grid is a huge risk. A lot of developers spend up front before they even know they have a grid connection.”

Whereas the Netherlands comes with a connection up front, it’s unclear, particularly around timeframes, in the UK, which could leave developers with stranded assets, making investment decisions a challenge, she says. But, on the upside, this means developers are innovating, looking at hydrogen as an export option, for example, she said.

Focusing on Scotland, which had the recent ScotWind round, Richard Eakin, Project Director, ScottishPower Renewables, said the focus needs to be on three areas: availability of people, skills and resources; commercialising technology in the timelines tabled; timing and nature of grid connections, “which is at the forefront of most Scotwind developers’ minds at the moment”.

Alice Etheridge, Offshore Coordination Senior Manager, National Grid ESO, said through the UK Department for Business, Energy and Industrial Strategy (BEIS) the offshore transmission network was reviewed and it was recognised to meet targets, the transmission network needs to be taken forward in a different way.

SSE Renewables was awarded the Ossian project earlier this year. Andy Lewin, Project Director, says £20 million has already been committed to development works on this project. “We believe Ossian could be a platform to demonstrate the potential of floating wind.”