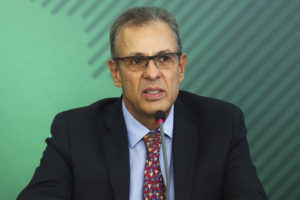 (Reuters) – Washington and Brazil have discussed the South American nation’s role in keeping a lid on global crude prices since Russia’s invasion of Ukraine, Brazilian Energy Minister Bento Albuquerque told Reuters in an interview on Wednesday.

Brazil, with a current output of around 3 million barrels of oil per day (bpd), has been increasing production for years and is aiming for a 10% increase to 3.3 million bpd in 2022.

Asked if the United States had reached out to talk about potential production increases, Albuquerque said the two countries were cooperating.

“I already had two meetings with energy secretary (Jennifer) Granholm, and we have been talking about this, the importance to stabilize the offer and demand of oil and gas around the world,” he said.

Albuquerque, however, said a dramatic short-term boost would be logistically difficult.

The U.S. Department of Energy did not immediately respond to a request for comment.

Albuquerque, who expects Brazil to export 1.1-1.2 million bpd this year, added that although high oil prices offered some benefits to the major producer and exporter, the current level was not economically healthy for any party.

Asked if he sees global oil prices remaining at about $100 a barrel for the rest of this year, he said: “I hope not”.

“It’s good for Brazil as a producer and exporter of oil, but we have to stabilize the price, and more than $100 a barrel is too much for any country, for developing countries and for developed countries,” he said.

Albuquerque, who was speaking in New Delhi, said he would like to see more Indian investment in Brazil’s oil and gas sector.

He added that the South American nation is willing to meet India’s oil demand, although oil deals are commercial contracts between companies.

India gets only a fraction of its oil imports from Brazil.