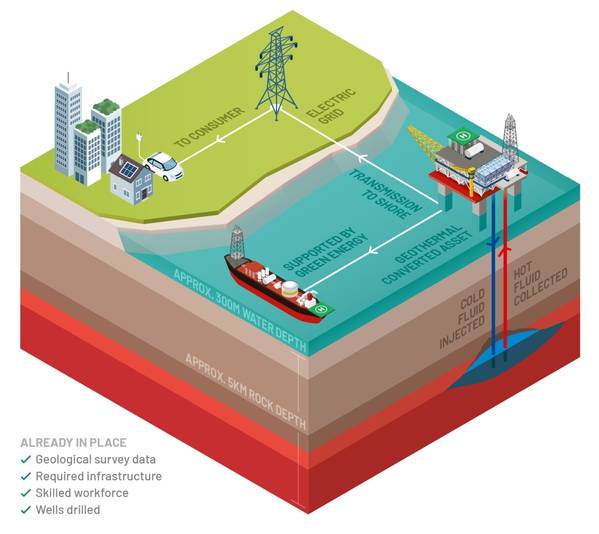 (OE) Shift Geothermal, a non-profit organization focused on geothermal energy, said Wednesday it was launching a bid to establish a new national center in the UK for geo-energy to realize the potential of a huge untapped UK energy source. This also offers an opportunity to use re-use existing offshore oil and gas facilities instead of scrapping them.

The organization believes the legacy of geological resources from the UK’s hydrocarbon production can be repurposed to produce geo-energy, delivering a low-cost, clean, stable, and plentiful primary energy source, but a lack of collaboration and coordination in the UK is undermining progress to unlock its potential value.

Shift Geothermal forecasts geo-energy, where energy is harnessed from the sub-surface, could deliver up to 25% of the UK’s energy mix by 2050, with government commitment and a strategic approach to sharing research to propel innovation and pilot projects.

The organization involves experts from Durham, Heriot-Watt, and Manchester Universities along with experienced energy sector specialists.

Dr. Alison Auld, a Director of Shift Geothermal and carbon reduction specialist said: “Geo-energy has huge potential in the UK, but this has been largely overlooked and we now risk being left behind in terms of both investment and projects despite that potential.

“The future energy mix will be increasingly diverse, and technologies must be accelerated to rapidly enable sources of net zero-carbon energy. People all too often think of Iceland and volcanoes when they think of geo-energy, but the technology has moved on. Repurposing and reusing existing offshore infrastructure for geo-energy is a transformational pivot for the UK to develop a new, limitless, home-grown clean energy source whilst supporting the economy and creating jobs.”

According to the organization, geothermal power generation is witnessing rapid growth worldwide with installed capacity having grown by approximately 75% in the last five years. This growth has been accompanied and aided by similarly rapid development of geothermal technology that can effectively generate power from relatively low temperatures, in turn increasing the number of viable sites including existing oil and gas production facilities, the organization said.

The UK Government’s recent Net Zero Strategy outlined how the country will unlock an investment of £90bn by 2030, to secure 440,000 jobs in green industries and pull through low carbon technologies and sectors to maturity and scale. One of the strategy’s key commitments is to decarbonize and electrify existing oil and gas developments in order to meet targets, Shift highlighted.

Not dependent on weather

Clean geo-energy can come in many forms, Shift says, with new and ground-breaking ideas continually being developed.

However, Shift adds, many concepts such as power generation from coproduced fluids from oil and gas wells saw initial research projects dating back to the early 1990s and subsequently, many such projects are being developed around the world.

Continually improving technology has meant that the rate of development has increased and in recent years useful amounts of power have been successfully generated at several oil and gas sites around the world. Crucially, Shif said, the energy produced is not dependent on weather conditions and has a high capacity for electrical power output compared to other low carbon sources.

“Shift Geothermal is seeking government and industry support to accelerate coordinated research and act as a catalyst for projects. It will identify and progress demonstrator and at scale projects and lobby for legislative and regulatory structures to establish geo-energy as part of the future energy mix,” the Organization said.

Professor Jon Gluyas of Durham University and executive director of Durham Energy Institute said: “The UK has an opportunity to be a leader in how it recycles and repurposes its existing oil and gas infrastructure. Why charge ahead with decommissioning when we can rethink the future offshore sector and create new value by creating geo-energy hubs that provide clean power to existing oil and gas platforms, bring power to the shore and safeguard and create many thousands of jobs. It’s simply too big a resource to be ignored.”

A recent report from global consultants Arup on the potential for onshore geothermal in the UK estimated a requirement for 15,000 direct jobs and 25,000 indirect jobs.

“Shift Geothermal believes the potential for offshore roles to be even larger. Currently, the U.K. petroleum industry employs 37,000 directly and a quarter of a million people in the supply chain. Displacement of part of that industry by geothermal would require similar numbers of workers with similar skills,” Shift Geothermal said.