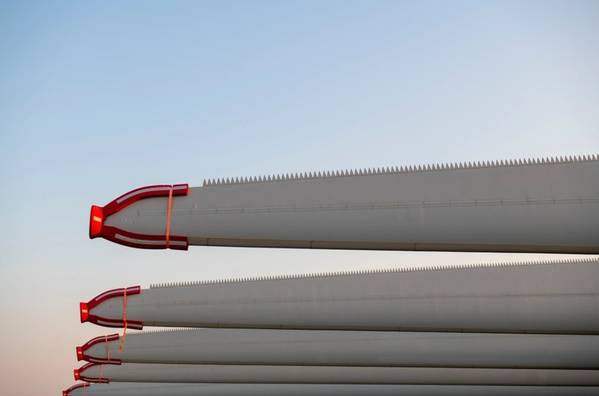 “Wind power is one of the cornerstones in the quest to tackle the climate emergency. With more than 200 GW of new offshore capacity projected by the Global Wind Energy Council to be installed by 2030, it is critical to quickly introduce recyclable solutions,” the company said.

“With this technology, separation of the materials in the blade is possible at the end of its lifetime, enabling recycling into new applications and thereby defines the next milestone in sustainability,” Siemens Gamesa said.

“Many components of a wind turbine, such as the tower and nacelle components have established recycling practices. Until now, the composite materials used in wind turbine blades have been more challenging to recycle,” the company said.

Siemens Gamesa says that its wind turbine blades are made from a combination of materials cast together with resin to form a strong and flexible lightweight structure.

“The chemical structure of this new resin type makes it possible to efficiently separate the resin from the other components at end of the blade’s working life. This mild process protects the properties of the materials in the blade, in contrast to other existing ways of recycling conventional wind turbine blades. The materials can then be reused in new applications after separation,” the company said.

“Built on proven, reliable processes, the Siemens Gamesa RecyclableBlade breaks this mold and is the first of its kind, enabling recycling at the end of its lifecycle, and sets the path to a future where the full recyclability of projects will be a market requirement,” Siemens Gamesa said.

According to the wind turbine maker, these recyclable turbine blades will be installed and monitored at RWE’s Kaskasi offshore wind farm in Germany. Kaskasi is expected to go online in 2022.

Apart from RWE, Siemens Gamesa is working with EDF Renewables and wpd with the aim to deploy several sets of RecyclableBlade at their future offshore wind farms.

While the recyclable blades are now ready for deployment, Siemens Gamesa doesn’t want to stop there. The wind turbine manufacturer has also set a goal of making not just blades, but also turbines fully recyclable by 2040.

“Our aspiration is to produce wind turbines that can generate renewable electricity for 20-30 years. When they reach the end of their useful life, we can separate the materials and use them for new relevant applications. The RecyclableBlade is a great step in that direction and well ahead of our 2040 goal,” said Gregorio Acero, Head of Quality  Management & Health, Safety, and Environment at Siemens Gamesa.