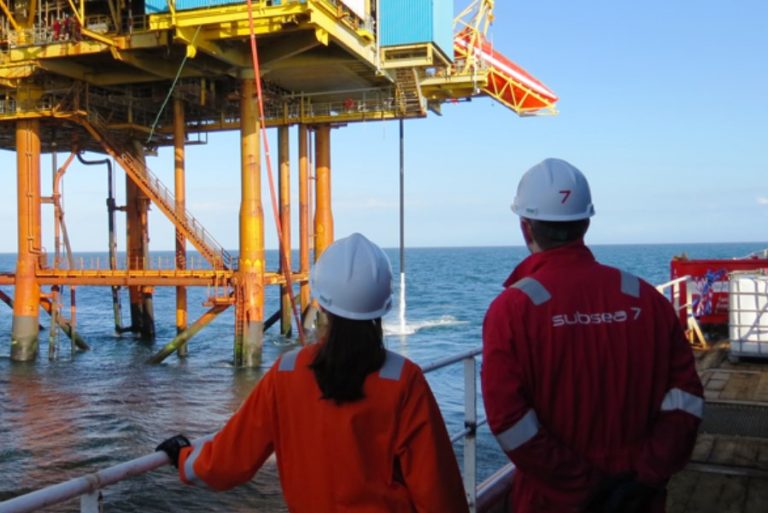 John Evans, Chief Executive Officer, said:
In the first quarter of 2021 Subsea 7 delivered solid revenue and EBITDA growth compared with the prior year. Although we experienced a relatively quiet quarter for announced new orders, the Group’s backlog remains robust at $6.0 billion and tendering activity for oil and gas projects has improved in certain regions of the world, with several contracts expected to be awarded to the industry in the coming months. Our high Renewables backlog adds to our revenue visibility and demonstrates the advantage of a diversified energy services strategy. We look ahead with optimism to a recovery in new order flow in our oil and gas business as well as continued, strong growth in our well-established offshore wind business.

Strategy update
Subsea 7’s two-pronged strategy comprised of ‘Subsea Field of the Future’ and ‘Energy Transition – Proactive Participation’ made further progress in the quarter with our first carbon capture and storage award, for the Northern Lights project in Norway, as well as the establishment of a joint venture to develop the Salamander floating offshore wind project in Scotland. These form part of a collection of activities focused on emerging energies that underpin our commitment to enabling lower carbon solutions both for Subsea 7 and our clients.

First quarter operational review
In the first quarter the Subsea and Conventional business unit made good progress on several projects. In the Middle East, Seven Champion was active in Saudi Arabia installing topsides at the 3 PDM project at the Hasbah and Arabiyah fields (CRPO 27) as well as the 28 Jackets project at the Marjan, Zuluf, Safaniya and Ribyan fields (CRPO 47, 48 and 49). In Angola, Seven Arctic and Simar Esperança completed the final phase of the Zinia project, while the Sangomar project in Senegal made good progress in the fabrication of pipelines and subsea equipment. In the Gulf of Mexico, Seven Navica and Seven Pegasus were active on the Ichalkil project, while Seven Oceans and Seven Pacific continued offshore activities on the Mad Dog 2 project. Engineering and fabrication activities continued on the Anchor, King’s Quay and Jack St Malo projects. In Australia, Subsea 7’s scope was completed by Seven Eagle at the West Barracouta field while procurement activity commenced on the Barossa project. The diving support and light construction vessels achieved good utilisation in the North Sea.

In the Renewables business unit we continued work on the Seagreen project, with fabrication of the jackets and inner-array cables making further progress. In Taiwan, winter weather resulted in Seaway Yudin remaining on standby for most of the quarter. Seaway Aimery and Seaway Moxie were in transit to Europe ahead of their campaigns in the North Sea.

Overall, utilisation of Subsea 7’s active fleet was 66% in the first quarter, compared to 63% in the prior year period. The quarter was marked by a number of international transits of some of our global enablers. In addition, Seven Vega incurred significant downtime while in the Gulf of Mexico for equipment repairs to address storm damage. It returned to operation on 14 April and the delay has largely been accommodated by reallocation of work to Subsea 7’s other pipelay vessels. At the quarter end, the active fleet comprised 29 vessels following the release of Harvey Intervention.

First quarter revenue of $1.0 billion increased by 33% compared to the prior year period, reflecting significantly higher activity in Renewables as well as moderate growth in the Subsea and Conventional business unit as projects deferred from 2020 into 2021 made progress. Adjusted EBITDA of $102 million was up 50% year-on-year driven by good progress on Subsea and Conventional projects, high utilisation of the PLSVs and progress on Seagreen, partially offset by a high level of vessel transit time. After a depreciation and amortisation charge of $110 million, the Group recorded a net operating loss of $9 million. Net income for the quarter was $1 million, after a tax charge of $2 million and other gains and losses of $16 million, including net foreign exchange gains of $9 million.

During the quarter, net cash generated from operations was $71 million despite a $25 million adverse movement in net working capital reflecting the phasing of prepayments on certain large EPCI projects. Capital expenditure was $24 million including costs relating to the conversion of Seaway Phoenix for cable lay, as well as dry docking costs associated with Seven Falcon and continued investment in the Group’s digitalisation initiatives. Overall, cash and cash equivalents increased by $15 million since 31 December 2020 to $527 million and the Group ended the quarter with net cash of $74 million, including lease liabilities of $251 million.

During the first quarter, Subsea 7 booked new orders of approximately $600 million and escalations of approximately $200 million, resulting in a book-to-bill ratio of 0.8. The backlog at the end of March 2021 was $6.0 billion, of which $3.4 billion is expected to be executed during the remainder of 2021.

Outlook for full year 2021
The outlook for oil and gas project awards has seen a gradual improvement during the first quarter, although tendering activity remains focused on certain regions with advantaged economics. The pace of tendering in Brazil has gained momentum with several projects scheduled to be awarded to the industry this year, and early engagement activity in Norway is high, which should drive increased tendering for EPCI projects from the end of the year onwards. The Gulf of Mexico remains an active market for smaller tie-back opportunities. While the offshore phase of these new contracts would fall in the period from late 2023 onwards, Subsea 7’s cost reduction plan is designed to optimise use of the fleet in the interim period. Tendering in Renewables remains active for projects expected to be awarded to the industry in early 2022, including in Asia, Europe and the US.

For the remainder of 2021 Subsea 7 benefits from a high level of visible activity afforded by its backlog, but quarterly results may be adversely impacted by the net costs associated with the Covid-19 pandemic. We continue to expect that revenue in 2021 will exceed the prior year level. While it is difficult to predict the operational and financial impact of Covid-19, Adjusted EBITDA is expected to improve year-on-year and we forecast net operating income to be positive.