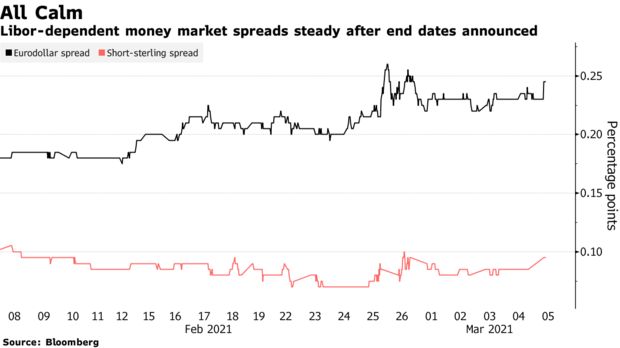 (Bloomberg) U.K. regulators kicked off the final countdown for Libor, ordering banks to be ready for the end date of a much maligned benchmark that’s been at the heart of the international financial system for decades.

The U.K. Financial Conduct Authority confirmed Friday that the final readings for most rates will take place at end of this year, with just a few set to linger for a further 18 months.

The move comes in the wake of major manipulation scandals and the drying up of trading data used to inform the rates, which are linked to everything from credit cards to leveraged loans. Regulators have made a concerted effort to wind it down in 2021, with the Federal Reserve and others pushing market participants toward alternatives.

Bank of England Governor Andrew Bailey said this was now the “final chapter” for Libor, saying firms don’t have any excuse to delay the work needed. “With limited time remaining, my message to firms is clear — act now and complete your transition,” he said.

Libor is deeply embedded in financial markets. Some $200 trillion of derivatives are tied to the U.S. dollar benchmark alone and most major global banks will spend more than $100 million preparing for the switch. Smaller players — from hedge funds to non-financial corporates — could also be caught in the crossfire, with many only at the beginning of the transition from legacy contracts.

“This comes as a huge relief to the market,” said Rishi Mishra, an analyst at Futures First. “This lets everyone plan ahead and focus on other things.”

The potential delay in the most-used dollar Libor tenors — most notably the three-month benchmark — is a concession to market concerns, but regulators remain adamant that dollar Libor shouldn’t be used for new contracts after 2021. Firms should expect further engagement from their supervisors to ensure timelines are met, the FCA warned.

Similar regulatory pressure is building in the U.S. The Fed is intensifying its scrutiny of banks’ efforts to shed their reliance on Libor, and has begun compiling more detailed evidence on their progress.

Friday’s decision locks in the benchmark’s fallback spread calculations, which for dollar Libor will be added to the Secured Overnight Financing Rate, or SOFR, the main U.S. replacement.

While speculation about the announcement’s timing jolted the eurodollar market in December, the market reaction on Friday was subdued. The spread between June 2023 and September 2023 Eurodollars widened one basis point, as did the difference between December 2021 versus March 2022 short sterling contract.

“The main takeaway is that it will fix the calculation of fallback spread which in turn will provide certainty to market participants in their transition,” said Antoine Bouvet, senior rates strategist at ING Groep NV.

The FCA also detailed proposals to deal with the most troublesome loans and securitizations that can’t be switched to replacement rates. The regulator will consult on synthetic Libor — which doesn’t rely on bank panel data — for the sterling and yen benchmarks, and will continue to consider the case for using these powers for some dollar Libor settings.