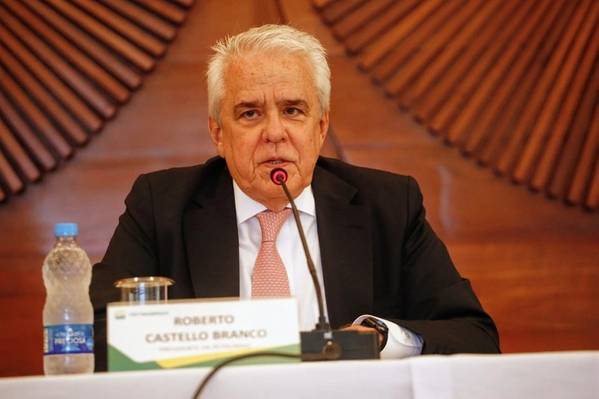 (Reuters) – State-led oil company Petrobras’ board is set to meet on Tuesday as its chief executive faces pressure from Brazilian President Jair Bolsonaro to resign amid a disagreement over fuel price policies, sources told Reuters on Friday.

The company’s board will discuss Bolsonaro’s efforts to force out Roberto Castello Branco over his insistence on passing international oil price hikes on to consumers, two separate sources said.

The directors are standing behind Castello Branco, even though the majority of them are government-appointed, said one of those sources, who, like the others, requested anonymity to discuss private conversations.

The company’s Brazil-listed shares tumbled 5% in Friday trading on renewed investor concerns about political interference in Petroleo Brasileiro SA, as it is formally known – a tendency that has forced the ouster of at least one previous CEO.

Castello Branco, a University of Chicago-trained economist who is a strong advocate of free market policies, was appointed to lead Petrobras when Bolsonaro took office at the start of 2019, and he has dealt periodically with the president’s complaints about prices.

The board meeting will follow a turbulent week for Petrobras in which Bolsonaro – who is under pressure from truckers protesting higher diesel prices – again slammed its policies. One source close to the company said its board and top executives were considering mass resignations to back the CEO’s independence.

During an announcement about lower fuel taxes on Thursday, Bolsonaro made his most explicit reference yet to his dissatisfaction with Castello Branco, saying there would be changes at Petrobras “in coming days,” even as he reiterated that he would not “interfere” with the firm.

“The head of Petrobras said a few days ago: ‘I don’t have anything to do with truckers.’ That’s what he said, the head of Petrobras. That’s going to have a consequence obviously,” Bolsonaro said during a live video chat after markets closed.

On Friday he reiterated that changes were coming at Petrobras, adding that there was a need for more “predictability” when it came to price hikes at the pump.

Petrobras has been raising fuel prices since a Reuters report on Feb. 5 disclosed details of its revised pricing policy, which led analysts to downgrade the company’s shares on concerns of possible political interference.

Still, the sources said the CEO was resisting pressure for now.

“(Castello Branco) won’t give in and he does not plan to leave,” said one of the sources, who requested anonymity to discuss sensitive matters. “There was a time when the board of directors was pro-government, and now it’s independent.”

The company’s shareholders’ meeting in April could be a potential risk, as the government will have an opportunity to push for directors who are more obedient to Brasilia, said one source with direct knowledge of the board’s thinking.

Goldman Sachs analysts warned in an early Friday note of more “noise” over fuel pricing while reiterating its “buy” rating on the stock. “We recognize short term newsflow is not supportive for the share price.”

Bolsonaro’s office did not immediately respond to a request for comment on Friday.