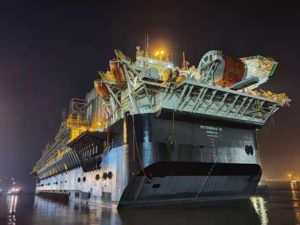 The Brazilian Institute of the Environment (Ibama) granted the Operation License for the platform vessel P-70, from Petrobras. The unit will be installed in the Atapu field, in the Santos Basin pre-salt. The document will be valid for four years.

The P-70 will have the capacity to process 150,000 barrels of oil per day and 6 million cubic meters of natural gas per day. The unit is part of the series of replicating platforms, whose projects have been standardized for the pre-salt environment.

The platform, as we know, has had a history of setbacks since it left China, where it was built. As a reminder, in January, one worker died and five others needed medical attention after accidentally drinking ethyl alcohol while the vessel was about 51.8 km off the coast of Durban, South Africa, on the way to Brazil.

A few days later, in Brazil, another incident: the FPSO had two anchor lines broken during a storm in Rio de Janeiro. The platform was moved to an area closer to Boa Viagem beach, in Niteroi.