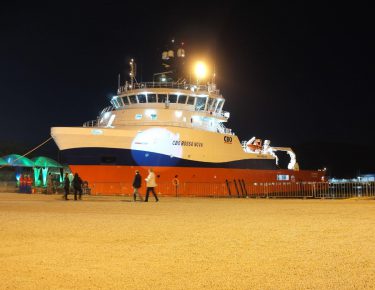 According to Havyard, which provided the design for the vessel, the ceremony was held at the Oceana Shipyard, and the vessel is now on its way to Rio de Janeiro to complete its final tests.

In 2014, Havyard signed the first contract for four Havyard 843 design and equipment packages was signed with Grupo CBO, which is both a shipyard owner and the biggest offshore shipping company in Brazil.

Grupo CBO had a contract with Petrobas and wanted six anchor-handling tug supply (AHTS) vessels in all. In 2016, Grupo CBO ordered a further two Havyard 843 designs.

According to Havyard, due to the large ocean depths off the coast of Brazil, the vessels require more equipment, buoys and anchors on deck than is usual in the North Sea.

“The traditional vessels, which are typically 18 meters wide, are too small for this kind of work.The new Havyard 843 design represents a completely new AHTS class that is adapted to Brazilian conditions. This means more space on the deck for more equipment, and a big side-by-side winch that enables safe and efficient towing and other anchor-handling services for mobile offshore installations,” Havyard explained.