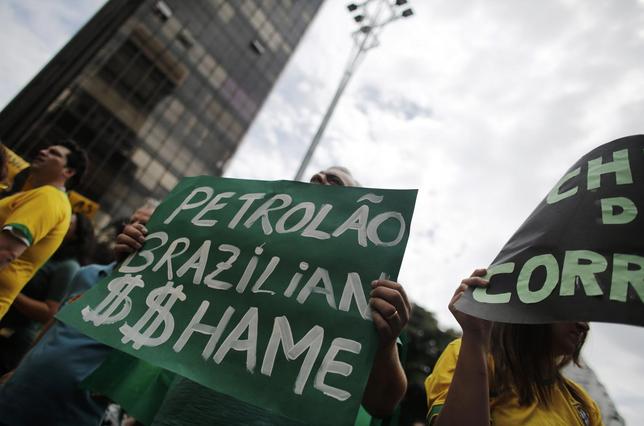 A demonstrator holds a placard during a protest against Brazil’s President Dilma Rousseff at Paulista Avenue in Sao Paulo March 15, 2015.
REUTERS/NACHO DOCE

The calculation is based upon the 3 percent of what Petrobras overpaid for contracts in a kickback scheme revealed in testimony from arrested executives linked to the scandal and is “conservative” according to unnamed sources in the report.

Petroleo Brasileiro SA, as the company

is formally known, was not immediately available for comment.

In January Petrobras published unaudited third-quarter results in which it estimated net potential write downs of 61.4 billion reais. This estimate, which was mentioned in the release but not actually taken on the balance sheet, was based upon multiple factors including the falling oil price, delays and cost-overruns as well as corruption.

Then-chief executive Maria das Graças Foster said at the time the company wanted to separate the loss of asset value caused by corruption from other factors such as the oil price.

Morgan Stanley estimated Petrobras could take a write down of 29.4 billion reais for the graft scheme in a note published earlier this week.

contracts, with the extra money kicked back to politicians and executives.

Wash” has led to the indictment of scores of executives from Brazil’s top builders and implicated dozens of politicians, the majority of them from President Dilma Rousseff’s Workers’ Party, who allegedly received graft money.

On Friday federal police said they had issued seven more arrest warrants in relation to the investigation.

Petrobras is under pressure to publish audited third and fourth quarter results before the end of the month to avoid risking further trouble with Brazil’s market regulator CVM and the U.S. Securities and Exchange Commission as well as possibly jeopardizing loan terms known as covenants.

Earlier this week Reuters reported the company could vote on April 17 to approve publishing the results, citing a board member. On Thursday Petrobras said in an email to Reuters it was working to release results as soon as possible but had still not fixed a date.

Keep Up With The Latest From BEI