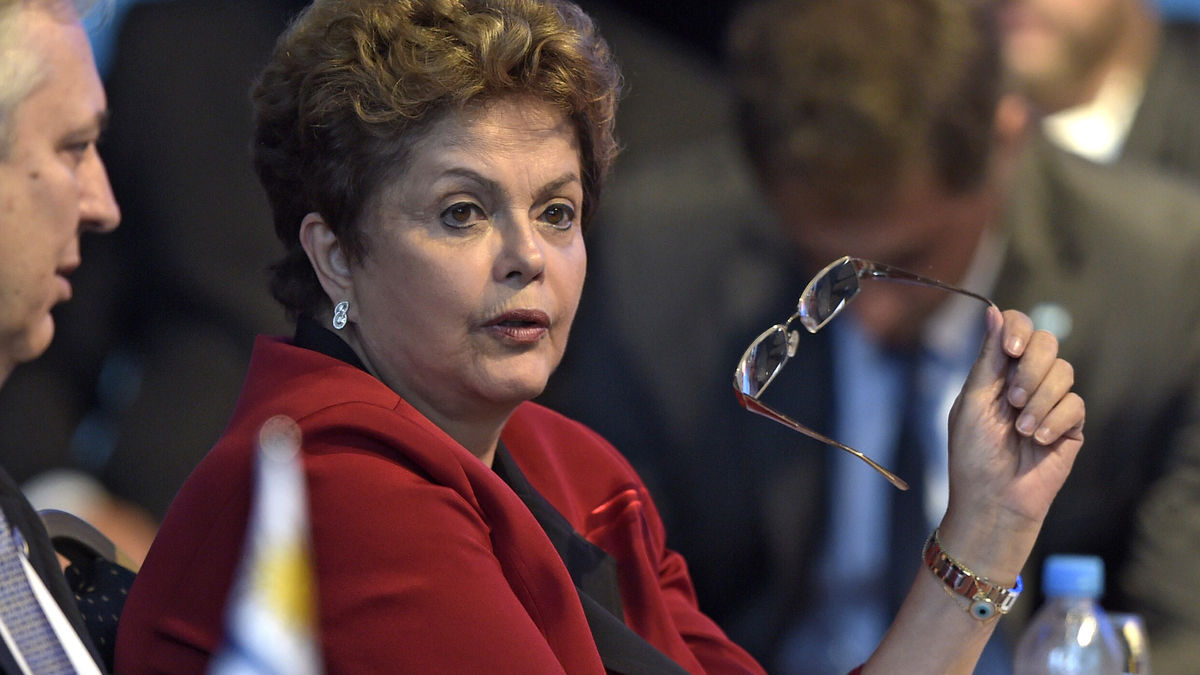 Brazilian President Dilma Rousseff’s approval rating in January fell to its lowest level on record, 23 percent, as more than three-quarters of people believe she was aware of billions in graft at Petrobras when chairing the company’s board, according to a poll from Datafolha released Feb. 8. Photographer: Juan Mabromata/AFP via Getty Images

(Bloomberg) — The corruption probe at Brazil’s state-run oil producer is becoming a greater threat to the ruling Workers’ Party than any scandal during its 12-year ascendancy.

The allegations of bribes and illegal donations to the party have engulfed President Dilma Rousseff more deeply than her predecessor, Luiz Inacio Lula da Silva, was affected by a congressional payoff scandal a decade ago. That is because Rousseff, 67, served as chairman of Petroleo Brasileiro SA between 2003 and 2010, part of the period during which the alleged payoffs occurred, before she became president.

The affair has pushed Rousseff’s approval rating to the lowest level of any Brazilian leader in 15 years, according to a poll by Datafolha, and puts her at risk of being permanently weakened just 43 days into her second term. Even members of her own party have questioned her leadership.

“She’s not a lame duck yet, but it’s going that way if she doesn’t change things quickly,” said Andre Cesar, an independent political analyst, said by phone from Brasilia. “The government has to turn the situation around, and it won’t be easy.”

After lifting 36 million people out of extreme poverty amid a decade-long commodities boom, the Workers’ Party, or PT, must now grapple with stagnating growth, rising social discontent, above-target inflation and a record budget deficit. The corruption scandal will make it harder for Rousseff to push through the tax increases and spending cuts needed to shrink a deficit that almost tripled under her watch, said Cesar, a previous director of public policy and business strategy at consulting company Prospectiva.

Rousseff’s approval rating slumped 19 points to 23 percent in the Datafolha poll conducted Feb. 3-5, with more than three quarters of respondents saying she knew about corruption at Petrobras. More than half said she allowed corruption to occur, while another 25 percent said knew about it, but was unable to stop it. The poll of 4,000 people had a margin of error of 2 percentage points.

“If there is something that can threaten the government, it is the Petrobras scandal,” said Thiago de Aragao, partner and director of strategy at Arko Advice, a Brasilia-based political risk company. “This is the biggest threat that the PT has had.”

The party suffered its first major defeat of Rousseff’s new term on Feb. 1 when its candidate to lead the lower house of Congress lost to Eduardo Cunha, who is a critic of Rousseff even though his party, the Brazilian Democratic Movement, is part of the ruling coalition. Two days after that vote, lawmakers from opposition and ruling coalition parties obtained support to begin a congressional inquiry into the Petrobras scandal.

Petrobras has identified at least 4.1 billion reais ($1.4 billion) in losses from a scheme, in which company executives allegedly took bribes from a cartel of construction companies and shared the proceeds with politicians. The board opted against using a fair-value methodology that indicated a total potential writedown of 89 billion reais.

Pedro Barusco, a former Petrobras services manager who turned state’s witness, told investigators the PT received as much as $200 million from the scheme in the decade through 2013, according to a transcript of his testimony published Feb. 5. The party says all donations were legal.

There is a large risk of the scandal implicating senior PT members, analysts at political risk consulting firm Eurasia Group led by Christopher Garman wrote in a note Feb. 9. The possibility of impeachment for Rousseff, while only about 20 percent, has “become a real risk to monitor,” they said.

“There is an attempt to criminalize the PT,” Rui Falcao, the party’s president, said in answer to e-mailed questions. While other parties have been implicated “ours was the only party whose treasurer was taken into custody to give a deposition.”

The average age of the nine prosecutors is 39 and none have held political office. Four of them worked on a case involving illegal transfers of as much as $32 billion at former state bank Banestado from 1996 to 2000, when a president from the PT’s rival Brazilian Social Democracy Party was in power.

The investigation has drawn comparisons to the probe into the cash-for-votes scheme during Lula’s tenure that came to be known by the tagline “Mensalao,” which means “big monthly payment” in Portuguese. In 2005, Lula apologized to the nation and said he felt betrayed by party members who would be brought to justice.

After the Mensalao probe was opened, the government’s approval rating fell to a low of 28 percent at end-2005 from 45 percent a year earlier, according to Datafolha. Lula won re-election the following year as the rating recovered and climbed to a record 83 percent by the end of his presidency.

“Mensalao wrongdoings were buying votes, passing money to the parties so their deputies would vote the right way,” Fleischer said. “In my estimation that’s not as bad as ripping off Petrobras,” which many people see as Brazil’s “crown jewel,” he said.

As chairman of Petrobras, Rousseff presided over board meetings where yearly budgets, financial results and high-level staff changes are debated and approved. The job also involved approving major acquisitions and asset sales.

The presidential press office didn’t respond to an e-mail seeking comment on the scandal’s impact on her ability to govern.

Marta Suplicy, a PT senator who previously was Rousseff’s culture minister, wrote in an opinion column in Folha de S. Paulo newspaper Jan. 27 that government mistakes and a lack of transparency are to blame for quickening inflation, higher interest rates and an erosion of workers’ rights.

“We’ve experienced crises of all kinds: economic, political, moral, ethical, water, energy and institutional,” she wrote. “All of them were created by the absence of transparency, trust and credibility.”

Rousseff will need congressional approval for budget laws and some measures aimed at shoring up government accounts after posting a budget deficit of 344 billion reais last year, the biggest on record. Those include planned cuts in unemployment and pension benefits.

The austerity comes at a time when Brazilians are already being squeezed by inflation. Consumer prices rose 7.14 percent in the year through January, the most since 2011, and will finish 2015 at 7.15 percent, according to economists in a central bank survey.

Analysts surveyed by Bloomberg forecast that growth slowed to 0.1 percent in 2014 as more than four years of above-target inflation eroded consumer and business confidence. Growth had averaged 3.5 percent in the previous 11 years.

The Ibovespa stock exchange index has declined 3.5 percent this year while the nation’s local bonds have increased 0.4 percent — less than the average for emerging markets. The real has depreciated 7.3 percent over that period.

Rousseff attended the Workers’ Party’s 35th anniversary last week and inside the wood-paneled theater in Minas Gerais state addressed 2,500 politicians and party stalwarts. Her comment that the government would carry out the fiscal adjustment without putting at risk job creation or wage increases was met with silence. The party treasurer, fresh from his interrogation by investigators, was greeted with applause.