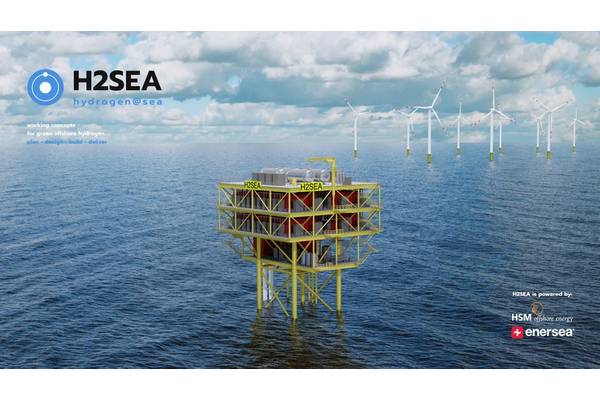 In the last few years, there’s been a proliferation of projects targeting the production of hydrogen. Its seen as one of the levers towards net zero and, more recently, a way to help underpin energy security, especially in Europe. Many think producing the stuff offshore is a big opportunity.

(OE) Many are keen to promote renewable (or green) hydrogen. Producing it via electrolysis, using renewable energy, would mean the so-called grey or blue variants of the stuff (made using steam methane reforming of natural gas with or without carbon capture) could be phased out. The green stuff could also be used to decarbonize otherwise hard to electrify users, in industrial and transport, for example, as well as a means for storing or moving energy from generation to demand centres. It could also help monetise energy that’s otherwise curtailed – when more power is produced than needed.

Producing the stuff offshore might not seem like an obvious option, but it’s one many are looking at with ideas ranging from hosting hydrogen production on hubs or energy islands to housing electrolyzers on individual turbines.

James Ferguson, Research Engineer – Hydrogen Systems, at the Offshore Renewable Energy Catapult (OREC) in the UK, says that with between 75-150 GW of offshore wind needed to meet energy demands by 2050, there must be ways to integrate that into the energy system. According to an OREC report focusing on offshore wind, Solving the Integration Challenge, doing it all via grid integration would be difficult or unattractive.
“We think energy transported as hydrogen in a pipe has potential to be cheaper than unit per of energy than in a cable,” says Ferguson, citing a study by Centrica which put 2020 cable costs at 4.6p/kWhr compared with a pipeline at 1.2p/kWhr. While this was for onshore transmission, it’s thought to be comparable with offshore. “We see that benefit might increase with the capacity of the wind farm,” he says. OREC’s report also found that onshore and offshore production costs could converge by 2050.

A study by global consultancy ERM’s Dolphyn (Deepwater Offshore Local Production of HYdrogeN) team, which have promoted a project aiming to at least one 10MW wind-hydrogen demonstrator off Scotland, found distance to shore had a big impact on economics – with longer distances benefitting hydrogen pipelines. 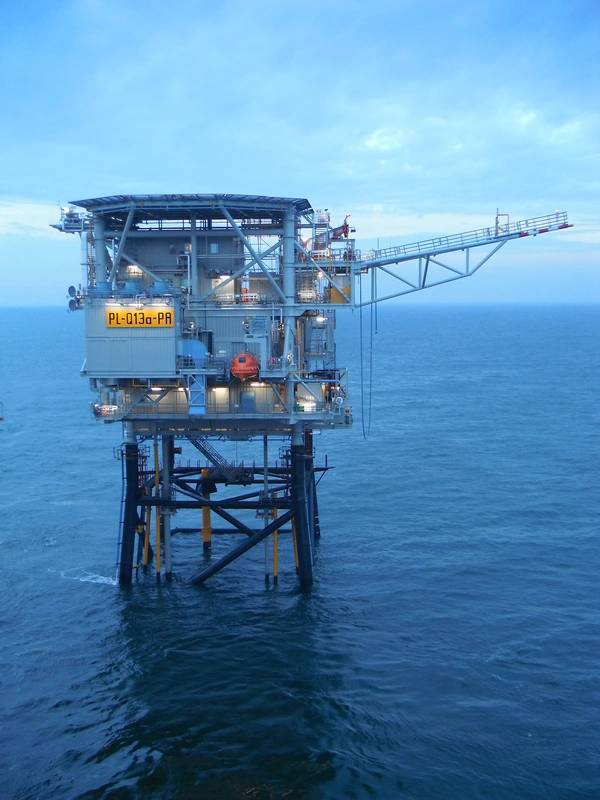 Neptune Energy’s electrified Q13a platform that’s due to host an electrolyzer offshore the Netherlands. Image from Neptune Energy.
Piping the stuff to shore results in lower transmission losses and it also avoids the requirement to meet grid specifications, when wind power enters the grid, and substations are no longer needed (for farms purely producing hydrogen), says Ferguson. Another benefit is flexibility – if a wind farm is expanded, more hydrogen can be pushed down a pipe with a change of pressure, whereas a new export cable would have to be built.

While it might involve some challenges, existing pipelines could also potentially be reused, which would reduce costs even further. Pipelines (which another study has suggested are less failure prone than power cables) could also be used for energy storage, through “line-packing”, by increasing the pipeline pressure then lowering it when it’s needed. Studies have found that 12 tonnes (400MWh) of hydrogen could be stored per kilometre of pipeline, Ferguson says. Producing it offshore and storing it in geological formations is another option, with suggestions TWhrs of the stuff could be stored in certain formations.

One of those exploring the idea is Swedish energy firm Vattenfall. It’s got stakes in a number of projects including a pilot of the Deep Purple concept and an offshore wind to hydrogen demonstration at the European Offshore Wind Deployment Centre (Aberdeen Bay wind farm) in Scotland. Vattenfall is also a member of the AquaVentus initiative, which proposes installing 10GW of offshore wind-based hydrogen electrolysis in the German North Sea, with the gas piped to shore via a pipeline.

Catrin Jung, Head of Business Unit Offshore at Vattenfall, says onshore grids are overloaded and the challenges in building new ones is one driver for offshore hydrogen production. “We came to the conclusion that if we can produce hydrogen at the turbine, that could have a great cost benefit,” she says. “If you don’t have electricity transmission at all you can take out all the cabling and have pipelines instead.”
A study by AFRY Management Consulting commissioned by AquaVentus, an association of 96 companies, says that a pipeline for hydrogen generated offshore could be realized up to five and a half years faster than submarine cable connections for offshore electricity, which would then be used for electrolysis onshore. It said the investment would also cost less, reducing the production costs for green hydrogen.

“There are quite a lot of unknowns and that’s why the Aberdeen Bay project was started, using an existing wind park and installing electrolysis on one of the jackets,” says Jung. It will still have the electrical equipment, but in addition everything needed for hydrogen production including desalination – which means it could be the world’s first hydrogen producing offshore wind turbine when it starts up, expected in 2025. This will allow testing how it runs, how to maintain it, how to work with the pressure of the hydrogen in a new pipeline, which will be built to shore. “It’s close to shore and we also see that there’s interest in offtake for clean hydrogen locally (Aberdeen has a hydrogen bus fleet),” says Jung. The project was recently awarded £9.3 million UK government funding.

Vattenfall has also bid for the Hollandse Kust West (Holland Coast West) development. Its bid for the project includes building three turbines with hydrogen production on them. The produced hydrogen would be sent to shore, to the Port of Rotterdam, via a new pipeline. “At Aberdeen, we’re using an existing turbine,” says Jung. “At Hollandse Kust West, it would be three new turbines, specifically built with electrolysis equipment, but still with electrical equipment, to be somewhat flexible. It would be a next step to feel comfortable to take out the electrical piece.”

Longer term, Jung sees great potential in floating offshore wind. Being deeper offshore and with steadier (and higher capacity) winds, and with 20MW turbines potentially on the horizon, producing hydrogen and piping it to shore offers a favourable option. Indeed, offshore wind compares favourably with solar for capacity factors, at 45-50%, and higher with floating offshore wind, compared with 12-13%, making it a stronger feedstock, highlights Wood Mackenzie analyst Rishab Krishna Shrestha. However, while it also has greater scale than solar, it is also more expensive, which could make solar-powered hydrogen shipped into Europe cheaper than more local offshore wind-based hydrogen, he adds.

ERM is targeting floating offshore wind with its concept. The company, which got £8.62 million UK funding earlier this year, has set out plans to develop GW-scale green hydrogen floating wind sites in the Celtic Sea with partner Source Energie. It says its first site (size undisclosed) under development – as part of a phased roll-out – is called “Dylan” (a Welsh sea god), about 60 km off the Welsh coast, with a target deployment date of 2027/2028.

There will be challenges. Ferguson highlights the need for an energy supply for “black start” of electrolyzers where there’s no existing power connection. There’s also a big question around safety and from that perspective it can make more sense to have electrolyzers onshore. OREC is exploring some of these areas now and has conducted a hazard identification study. While that found lots of things could go wrong, none were insurmountable, he says.

To help development of this area, OREC has been working with various players, including Vattenfall and ERM. It’s setting up a test facility to work with hydrogen from the Aberdeen hydrogen-wind pilot. But it’s also looking at a broader test facility to test hydrogen equipment, for comprehensive testing and development of hardware to help developers see what’s happening when the plug electrolysis into a wind turbine. 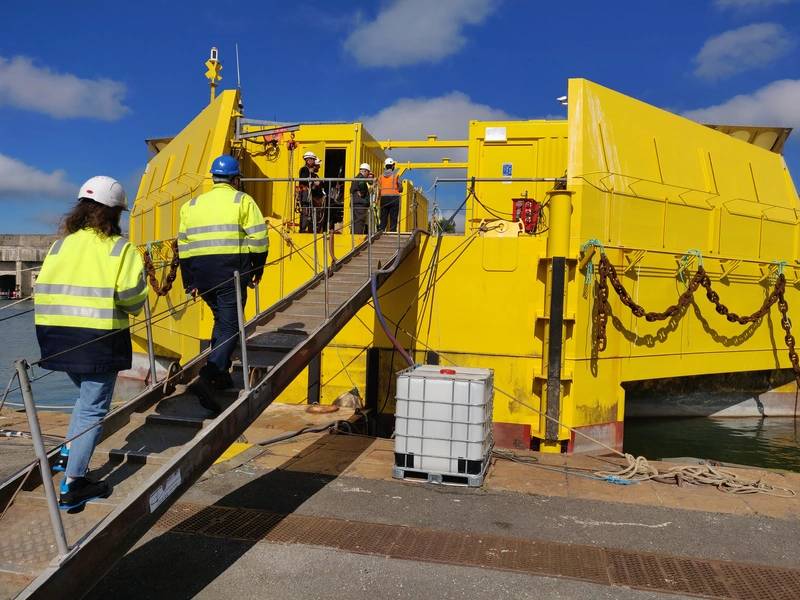 Wood Mackenzie analyst Bridget van Dorsten highlights that offshore wind is just one feedstock for hydrogen. Of the pipeline of projects announced to date, only 1/10 have an offshore wind component to powering the electrolyzer. She says targets like those set out in the REPowerEU policy will be needed to incentivise investment in green hydrogen. Likewise the ability to include hydrogen in large scale offshore wind projects also provides an incentive as it means developers can arbitrage – i.e. when there’s excess power and it’s cheap, convert it to hydrogen to then sell on when prices are higher, adds Rishab.That will mean a market developing, which currently there’s not. Prices today are on contracts, normally of around $3/kg for grey hydrogen, says van Dorsten. It’s thought that if green hydrogen can hit $2/kg, this will make it competitive. Wood Mackenzie forecasts the cost of green hydrogen – currently around $6-8/kg – to reach $2/kg in the mid-2030s, with the main driving factor (70-80%) being the cost of renewable energy.

François Paquet, Impact director of the Renewable Hydrogen Coalition (founded by Breakthrough Energy (founded by Bill Gates), SolarPower Europe and WindEurope), says renewable hydrogen is a game changer and that there’s a market emerging, with companies designing hydrogen fuelled vessels that could then go and be refuelled at an offshore wind farm where hydrogen is produced.

He  highlights a project Siemens Energy is coordinating, H2Mare, a part of which is looking at just this scenario. But, “It’s still too early to say where the market and technology will go,” he says. “There are plenty of different projects looking into developing different options, onshore and offshore. “The ambition is high, but we need tools to give us the ability to deliver that,” says Paquet, highlighting challenges from permitting and the grid to auctions and manufacturing capacity. Creating certainty around the demand, is also very important, he says.